The people of Wisconsin chose a large and also healthy change of direction for their State in the 2010 election. That change, as we all saw Thursday, is already underway (that in another post). However the Obama Thugocracy has a different idea —assault—look.

Thugocracy? Yes it consists of labor unions, most big media, the Democrat party, government bureaucracy and any branch of government controlled by democrats. (See a comprehensive list below.) The number one thug in 2011 is President Obama. While Thug-Obama charges the Wisconsin government with “assault on unions . . .—our hard working neighbors,” the Thugocrat Party, via its subsidiary Organizing For America, has bussed thugs into Madison to define “civility” as practiced by Thugocrats. Take a look at Thugocrat civility in Madison: 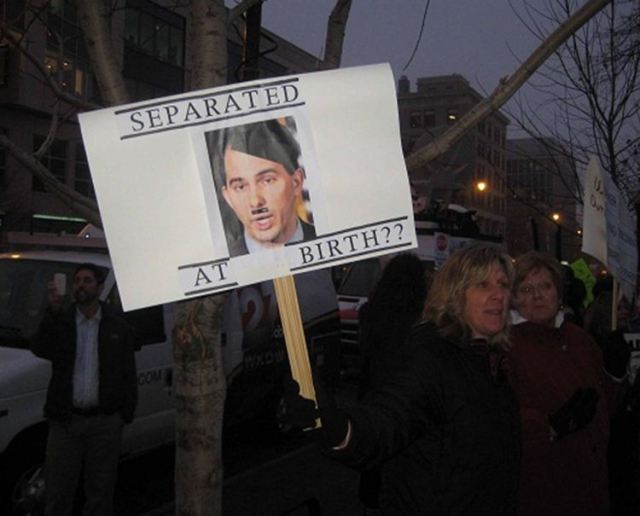 They are absolutely predictable. If it was not so serious, it would be funny.

Bussed in from Thugocrat Organizing for America?

There you are, civility as requested by the Thug in Chief at a “Memorial Service” in Tucson, Arizona, this past January 12, complete with crosshair on the head of a person not a Congressional District. Unbelievable!

Last November, seeing the Obama Administration as grabbing the fruits of patriotic American’s pursuit of happiness to line the coffers of Democrat special interests, I started a Vested Interest List. The work was easy. Dan Freeman’s article, “The new Axis of Evil,” had everything I needed for the list, Dan’s “dirty dozen.” Events —total emergence of Obama Thugocracy— have overrun any need for a Vested Interest List. But Dan’s article is more pertinent today than ever. We are used to mandates in the Thugocracy so just “mandate yourself” to read The New Axis of Evil Now. Notice the many elements of Dan’s Dirty Dozen that are involved in the Wisconsin civility:

I now use the term, “Secular Fundamentalist” to describe this crowd, Mr. Freeman uses “The New Axis of Evil.” Use either term or coin your own, the important thing is to clearly understand what “fundamentally transform” means and how far the Thugocracy has come in two years to take America from Liberty to darkness.

Richard Johnson: a mature Christian who understands the sweep of history, the unique role of America and these times clearly and precisely.
View all posts by Richard Johnson →
This entry was posted in Liberty, Obama, Reclaiming and Restoring America. Bookmark the permalink.