The vote in the Assembly was announced at 3:53 central time. But the day was ushered in at the Capitol Building in Madison by college students who spent the night in the building.

Students from the nearby University of Wisconsin at Madison have always been a significant percentage of the demonstrators. But the muscle in Madison has been supplied by uniion thugs. Things have now become nasty, dangerous and potentially deadly for those determined to do the job the Wisconsin voters asked them to do.

DEATH THREATS TO WISCONSIN LAWMAKERS: YOU WILL DIE!!!!

MADISON – The State Department of Justice confirms that it is investigating several death threats against a number of lawmakers in response to the legislature’s move to strip employees of many collective bargaining rights.

Among the threats the Justice Department is investigating is one that was emailed to Republican Senators Wednesday night.  Newsradio 620 WTMJ has obtained that email.

The following is the unedited email:

Please put your things in order because you will be killed and your familes
will also be killed due to your actions in the last 8 weeks. Please explain
to them that this is because if we get rid of you and your families then it
will save the rights of 300,000 people and also be able to close the deficit
that you have created. I hope you have a good time in hell. Read below for
more information on possible scenarios in which you will die.

WE want to make this perfectly clear. Because of your actions today and in
the past couple of weeks I and the group of people that are working with me
have decided that we’ve had enough. We feel that you and the people that
support the dictator have to die. We have tried many other ways of dealing
with your corruption but you have taken things too far and we will not stand
for it any longer. So, this is how it’s going to happen: I as well as many
others know where you and your family live, it’s a matter of public records.
We have all planned to assult you by arriving at your house and putting a
nice little bullet in your head. However, we decided that we wouldn’t leave
it there. We also have decided that this may not be enough to send the
message to you since you are so “high” on Koch and have decided that you are now going to single handedly make this a dictatorship instead of a demorcratic process. So we have also built several bombs that we have placed in various locations around the areas in which we know that you frequent.

This includes, your house, your car, the state capitol, and well I won’t
tell you all of them because that’s just no fun. Since we know that you are
not smart enough to figure out why this is happening to you we have decided
to make it perfectly clear to you. If you and your goonies feel that it’s
necessary to strip the rights of 300,000 people and ruin their lives, making
them unable to feed, clothe, and provide the necessities to their families
and themselves then We Will “get rid of” (in which I mean kill) you. Please
understand that this does not include the heroic Rep. Senator that risked
everything to go aganist what you and your goonies wanted him to do. We feel that it’s worth our lives to do this, because we would be saving the lives
of 300,000 people. Please make your peace with God as soon as possible and
say goodbye to your loved ones we will not wait any longer. YOU WILL DIE!!!!

What a clear view of the hard left. But folks were on hand from the Wisconsin majority in support of the Republican legislators and Governor Walker:

Great to see Packers gear among these clean-cut citizens. 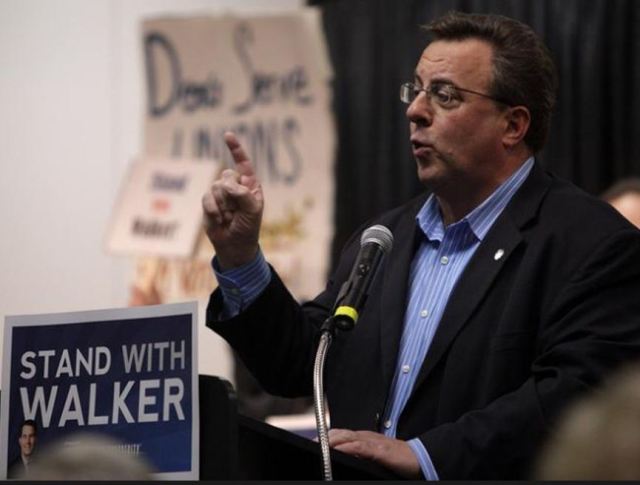 I do not believe Governor Walker found time to appear with these patriots but here is a Milwaukee Journal Sentinel summary from his news conference this morning:

Republicans checked with nonpartisan legislative agencies to make sure the action was legal, Walker said during a Thursday morning press conference.

Walker said the Republicans are acting on behalf of Wisconsin residents who support balancing the budget. “The public overwhelmingly supports asking our public employees to pay more for their pensions and health care,” Walker said.

He noted that he introduced his budget repair bill nearly four weeks ago and repeated his statement that state senate Democratic leader Mark Miller has blocked any possible negotiations on the budget repair bill.

“In the end, at some point, the public wants us to move forward,” Walker said.

“The public overwhelmingly supports asking our public employees to pay more for their pensions and health care,” Walker said.

He noted that he introduced his budget repair bill nearly four weeks ago and repeated his statement that state senate Democratic leader Mark Miller has blocked any possible negotiations on the budget repair bill.

“In the end, at some point, the public wants us to move forward,” Walker said.

Like buzzards gathering around a corpse, the far left has its predators—Michael Moore, for example. Here is a fun Milwaukee Journal Sentinel video interview with Jesse Jackson:

Jackson, “These people here are losing their jobs, their homes etc. and cain’t pay ­_ _ _ their children. These peoples backs against the wall. Where do they go? . . . These

people here —democracy at its best is liberty; not something rammed through. And people are reacting to it because the idea they’re using it—the budget deficit—as a pretext ah ah because ah ah he gave a huge tax cut and job cut. So people do not believe what they’re hearing.”

MSJ interviewer, “But they control the House [Assembly], the Senate and they have the Governor’s office and that’s what happened with health care, some would suggest, and there’s a parallel there.”

Jackson, “Well it is democratic tyranny when people real needs are not taken into account. What does this mean, in Milwaukee for example, when they get $900 million cut in education? What does it mean you try to privatize the rest of Wisconsin at Madison? What does it mean when you use this kind of power to privatize State assets and then sell them off to people without deliberative process? There’s something here that, even collective bargaining, the content is as important as collective bargaining.”

The bill will reach Gov. Scott Walker’s desk for final approval. The bill would, among other things, allow public workers to collectively negotiate wages only, prohibit public-worker raises beyond inflation, and bar unions from taking dues from public workers’ checks. Walker has argued the bill is necessary to help the state correct its deficits and avoid massive layoffs and property tax hikes.

Richard Johnson: a mature Christian who understands the sweep of history, the unique role of America and these times clearly and precisely.
View all posts by Richard Johnson →
This entry was posted in Liberty, Obama, Reclaiming and Restoring America. Bookmark the permalink.