CAN WE MULTI-TASK HERE? —UPDATE

Check out the Friday New York Times headline and story:

Islamist Group Is Rising Force in a New Egypt 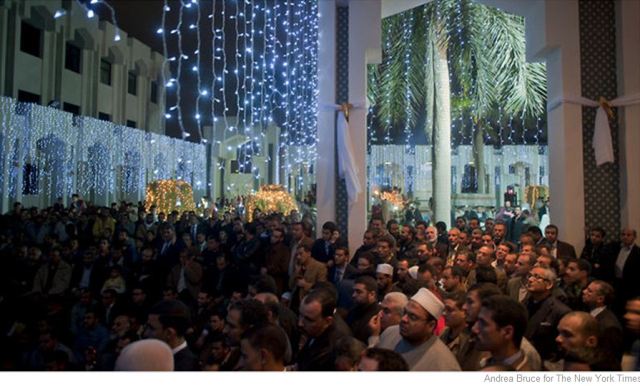 Reported by Michael Slackman March 23, 2011, CAIRO — In post-revolutionary Egypt, where hope and confusion collide in the daily struggle to build a new nation, religion has emerged as a powerful political force, following an uprising that was based on secular ideals. The Muslim Brotherhood, an Islamist group once banned by the state, is at the forefront, transformed into a tacit partner with the military government that many fear will thwart fundamental changes.

It is also clear that the young, educated secular activists who initially propelled the nonideological revolution are no longer the driving political force — at least not at the moment. . . .

In the early stages of the revolution, the Brotherhood was reluctant to join the call for demonstrations. It jumped in only after it was clear that the protest movement had gained traction. Throughout, the Brotherhood kept a low profile, part of a survival instinct honed during decades of repression by the state.

The question at the time was whether the Brotherhood would move to take charge with its superior organizational structure. It now appears that it has.

“The Brotherhood didn’t want this revolution; it has never been a revolutionary movement,” said Mr. Zarwan of the International Crisis Group. “Now it has happened; they participated cautiously, and they realize they can set their sights higher.”

But in these early stages, there is growing evidence of the Brotherhood’s rise and the overpowering force of Islam.

When the new prime minister, Essam Sharaf, addressed the crowd in Tahrir Square this month, Mohamed el-Beltagi, a prominent Brotherhood member, stood by his side. A Brotherhood member was also appointed to the committee that drafted amendments to the Constitution.

But the most obvious and consequential example was the recent referendum on the amendments, in the nation’s first post-Mubarak balloting. The amendments essentially call for speeding up the election process so that parliamentary contests can be held before September, followed soon after by a presidential race. That expedited calendar is seen as giving an advantage to the Brotherhood and to the remnants of Mr. Mubarak’s National Democratic Party, which have established national networks. The next Parliament will oversee drafting a new constitution.

Before the vote, Essam el-Erian, a Brotherhood leader and spokesman, appeared on a popular television show, “The Reality,” arguing for the government’s position in favor of the proposal. With a record turnout, the vote was hailed as a success. But the “yes” campaign was based largely on a religious appeal: voters were warned that if they did not approve the amendments, Egypt would become a secular state.

A banner hung by the Muslim Brotherhood in a square in Alexandria instructed voters that it was their “religious duty” to vote “yes” on the amendments.

He [Muslim Brotherhood spokesman Mr. Erian] would not comment on whether the Brotherhood had an arrangement with the military, but he said the will of the people to shift toward Islam spoke for itself and was a sign of Egypt’s emerging democratic values. “Don’t trust the intellectuals, liberals and secularists,” Mr. Erian said. “They are a minor group crying all the time. If they don’t work hard, they have no future.”. . .

“I worry about going too fast towards elections, that the parties are still weak,” said Nabil Ahmed Helmy, former dean of the Zagazig law school and a member of the National Council for Human Rights. “The only thing left right now is the Muslim Brotherhood. I do think that people are trying to take over the revolution.”

Did you notice the Times continues printing the fiction that this was “the young, educated secular activists who initially propelled the nonideological revolution.” They were always tools. How secular, educated or non-ideological they are is debatable.

But, even though the Times did it in their own way, they now have admitted what I have been writing since January 30, there will be no Liberty in Egypt.

Richard Johnson: a mature Christian who understands the sweep of history, the unique role of America and these times clearly and precisely.
View all posts by Richard Johnson →
This entry was posted in Liberty, Obama. Bookmark the permalink.