A Day in the Cradle of the American Revolution 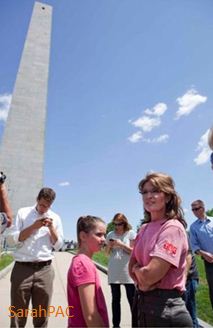 What a wonderful opportunity for any family see the spot of the engagement that crystallized independence in the minds of Boston patriots. Not every family can make it. If your family can’t go right now, why not tag along with the Palin family on the June 2 leg of the One Nation tour? Gather at your monitor and check it out.

Fortunately, the Obamedia is all tagging along with the One Nation tour. Not surprisingly, they found the Palins in violation of the law according to the Politico. You’ll have the most fun if you view the “issue” through the Rush filter.

Okay, when we come back, I’ll give you a little heads-up on this Politico story. “Palin’s Tour a Rolling Menace,” is the headline.

Politico. And, by the way, I think the author of the story is a woman, Kasie Hunt, probably how a woman would spell it. I don’t know anymore, frankly. These days of NOCIRC, who can tell.

“Sarah Palin’s bus is plastered with a mock-up of the U.S. Constitution. But her entourage — both the three-vehicle motorcade that includes the bus and the smaller, two-SUV version she uses for smaller events — hasn’t been very respectful of traffic laws. They speed. They run red lights and stop signs. They make last-second lane changes to get off the highway, sometimes without signaling.” I am not making up a word of this. This is The Politico. “So do the reporters following them. Journalists in the caravan trailing her ‘One Nation’ tour bus describe the experience as harrowing, a rolling menace careening up the East Coast in hot pursuit of the former Alaska governor who declined to provide any advance itinerary of her tour over six days on the road.

“As they left the clambake she attended Thursday in New Hampshire, Palin’s two-SUV caravan traveled at 52 miles per hour in a 35 mph zone as it peeled away from the hosts’ neighborhood. Both cars blew through a stop sign about a mile later. They did 70 mph in a 55 mph zone on I-95 — and then, after they got off, without signaling, flew right past a flashing sign informing them they were going 45 mph in a 35 mph zone. And that was after they had already stormed the major cities — and just missed driving through a tornado on the road into Boston.”

Chickification of the news, anybody? Here is the closing paragraph: “The reporters who are speeding, tailgating, cutting off other cars, blasting through roundabouts and passing on the right in an effort to keep up, say they have no other choice since they never know what Palin’s up to or where she’s headed — and aides typically won’t tell them anything. Once they’re on the road, they’re filing urgent updates by phone and figuring out unorthodox bathroom breaks, like the reporter who pulled over to relieve himself on the side of the highway going from Gettysburg, Pa., to Philadelphia — drawing notice from both Palin aides and the rest of the trailing press.”

This is hilarious what she’s done to ’em. This is the vaunted Politico. Some editor read this and said, “Yep, go ahead, post it.” You have Obama subverting the War Powers Act, and we get a treatise, a term paper on Palin flouting the traffic laws: “Palin’s Tour a Rolling Menace.” They can’t stand it. You know what really bugs ’em? The same thing that bugs them about me. They didn’t make her; they can’t destroy her. The press did not make me. I’m not the result of media buzz. I’m not the result of the media telling everybody I was hot stuff, and she isn’t, either. She is where she is despite the media trying to destroy her. They can’t because they didn’t make her. This is what they don’t understand. And the fact that they can’t. (Finish it)

This is the second half of a Rush roll that started with (you’ll laugh out loud) this insight:

RUSH: Yeah. You know, this is probably a good way to put this. The media, for two years has been trying to Palinize Palin — they’ve been trying to destroy her — and what’s happening here is she’s turning the tables on them and she’s Palinizing them, and the Republican Ruling Class is furious. The Republican Ruling Class is furious that Palin, going to all these states on her bus tour, is not coordinating with local Republican organizations, and there’s saying, “This ain’t cool! This is not cool, because if she turns out to be running she doesn’t need to be making enemies out of all these people.” But there’s another way to look at that, and that is: She’s not following a losing script.

They’re complaining, they’re whining, they’re moaning, “She’s so unprofessional! She’s not telling us where she’s going. We’re having to get involved in road races following her bus! Everybody’s endangered on the highway.” Oh, so you’re finally having to do a little work? Somebody’s not doing your job for you? Somebody’s not telling you where they’re gonna be, huh? You sit around, you expect everybody to tell you where they’re gonna be so you can show up on your good time.” Whatever happened to pounding the beat? Whatever happened to the whole concept of shoe leather, being a journalist, tracking down the story? (Go get it all)

Richard Johnson: a mature Christian who understands the sweep of history, the unique role of America and these times clearly and precisely.
View all posts by Richard Johnson →
This entry was posted in 2012, Liberty, Reclaiming and Restoring America. Bookmark the permalink.