JESUS LIVES! AN EVENT THAT TOUCHES EVERYONE EVERY DAY!

Yes, this historic fact that Jesus lives is the single hinge of history. It touches the life of every single human being in some way. Let us experience the empty tomb as described in St Matthew 28: 1-10, 16-20

At the end of the Sabbath, as it began to dawn toward the first day of the week, came Mary Magdalene and the other Mary to see the sepulcher.

And behold, there was a great earthquake, for the angel of the Lord descended from Heaven, and came and rolled back the stone from the door, and sat upon it. His countenance was like lightning, and his raiment white as snow.And for fear of him the guards shook and became as dead men. 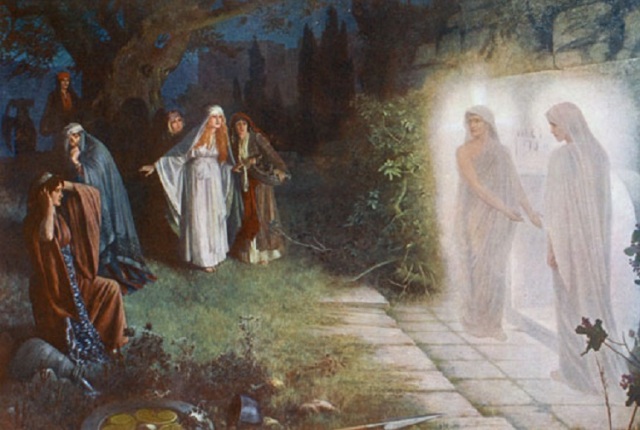 And the angel answered and said unto the women, “Fear ye not, for I know that ye seek Jesus, who was crucified.He is not here, for He is risen, as He said. Come, see the place where the Lord lay.And go quickly and tell His disciples that He is risen from the dead, and behold, He goeth before you into Galilee. There shall ye see Him. Lo, I have told you.”

And they departed quickly from the sepulcher with fear and great joy, and ran to bring His disciples word. And as they went to tell His disciples, behold, Jesus met them, saying, “All hail.” And they came, and held Him by the feet, and worshiped Him. Then said Jesus unto them,

“Be not afraid. Go tell My brethren to go into Galilee, and there shall they see Me.”

Then the eleven disciples went away into Galilee onto a mountain where Jesus had appointed them. And when they saw Him, they worshiped Him; but some doubted. And Jesus came and spoke unto them, saying,

“All power is given unto Me in Heaven and on earth. Go ye therefore and teach all nations, baptizing them in the name of the Father, and of the Son, and of the Holy Ghost, teaching them to observe all things whatsoever I have commanded you. And lo, I am with you always, even unto the end of the world.” Amen.

Every Christian is changed because He lives so shall we live with Him eternally in Heaven. But, what about non-Christians? I did say above, His resurrection “touches the life of every single human being in some way.” Here are just two examples: time and women.

The world operates on time measured according to the birth of Christ. We measure the years and days after His birth or Anno Domini—AD. It was common until this modern era to date a document “in the year of our Lord.” Article VII of the U.S. Constitution precedes the signing with this, Done in Convention by the Unanimous Consent of the States present the Seventeenth Day of September in the Year of our Lord one thousand seven hundred and Eighty seven and of the Independence of the United States of America the twelfth…. Today there are efforts to disguise the fact that Jesus is the hinge of time. Liberals in the west—Wikipedia is an example—will use the letters CE and BCE

Events and history before His birth are measured in years Before Christ—BC. (Some nations or cultures use different calendars internally. Israel is an example.)

From the time humanity fell into sin (Genesis 3:1-7) women have not been treated equally. They were, of course, created equally with men. Jesus life on earth was the only break women really ever had. Jesus’ life and recorded ministry was the example of equal treatment of “male and female” created different but equal in His image.

Women are to this day not treated equal. Most women and girls within Islam are slaves with no rights. But in the rest of the world, Christian and heathen, women are treated better. Men, who have never heard of Christ, know women should be accorded at least respect and kindness. In the West, especially the United States, women led the effort for equality in the 19th Century. The notable leader was a Quaker, Susan B. Anthony. It seems clear that without Christ women all over the world would be living in the darkness that is the life of Muslim women.

The change began to manifest at Pentecost. The Acts of the Apostles began the spread of Truth and light in this world that continues to this day. Today NBC opens a thirteen episode series called AD The Bible Continues. If, like most of us, you have plans, DVR it! Here is the trailer:

Richard Johnson: a mature Christian who understands the sweep of history, the unique role of America and these times clearly and precisely.
View all posts by Richard Johnson →
This entry was posted in Holy Week and Passover. Bookmark the permalink.