Announcing the formation of the team to Reclaim and Restore America

We are assembling key members of the team to reclaim and restore America. The team will not be drafted because it is a volunteer force. Many are already at work. There’ll be an announcement as the team takes shape over the next few days. But we need to announce the first member now because of his work Thursday.

He is our permanent MVP 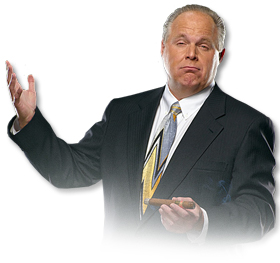 Thursday he framed this issue perfectly:

The Debt Commission is a trap

RUSH, “This debt commission report, Irksome Bowles, Alan Simpson, forget it.  It’s worthless.  The premise is totally corrupt.  Don’t get caught up in debating any of the minutia or the aspects of this thing.  It’s a setup; it is a trap.  All it does is cement the notion of expanded government spending ad infinitum.  I’ll give you a couple of reasons why I’m saying this but I’m not gonna waste my time like I see ’em doing on the news networks dissecting this stuff.  There’s nothing bold about it. There’s nothing revolutionary about it.  It’s a trick.

“The unions are beside themselves.  The unions cannot believe what’s happening.  Because the ratio in this deficit commission report, the ratio of spending cuts to tax increases is 75 to 25.  That alone makes me think the whole thing’s a trap.  Seventy-five percent of the ‘savings’ are spending cuts.  Twenty-five percent of the revenue changes are tax increases.  Well, Pelosi’s looking at that, Durbin is looking at that, and they say, ‘Whoa, there is no way!’ The unions are going bonkers. Our guys are kinda getting sucked in here on the Republican side.  ‘There’s… Well, you know, you have to look at it. There’s some potential here, maybe some things to work with.’

“The dirty little secret about this is that what it does is establish as a premise the notion of gigantic government.  Right after the break, I’m gonna explain this to you.  There was a great post at Ricochet.com, which is a new blog out there by Peter Robinson, and there’s a post by a guy named Steve Manacek, who has analyzed this and has come up with some absolutely scary analysis.  Well, it’s not analysis.  He has found scary admissions in this thing such as the level of government spending expressed as a percentage of GDP.  It’s skyrocketing under this proposal. So all this talk about spending cuts, it’s smoke and mirrors.  Anyway, if Obama has blinked he can be made to blink again.  If we stand firm.”

This is precisely the correct analysis. We all must understand this “Debt Commission Report” is and must be DOA! Remember, we (as a country) must go forward but only after turning around. “We the People” commenced the hard job of turning America around, November 3, 2010. That Debt Commission continues in the wrong direction. Rush has nailed it. We, like Rush, must stay with this. Read the rest HERE.

UPDATE: You do not want to miss Lee Cary’s piece at the American Thinker called, Tales of 57 States: The Deficit Wizards Speak

Here is a smple:

The Deficit Wizards said that, to reduce the Realm’s debt, the people should pay more taxes to the regime and receive fewer gifts. All these things, the Wizards said, would erase most, but not all, of the deficit incurred by the His Obamaness’ regime during his reign as POTUS.

Upon hearing the Wizards speak, the people of the Realm looked at each other and, in the spirit of Alan the Entertainer, said, “I guess these clowns think this is our first rodeo.”  Others asked, “So do we look like turnips?”  And, a few even said, “These two give real wizards a bad name!” Read the rest HERE

Richard Johnson: a mature Christian who understands the sweep of history, the unique role of America and these times clearly and precisely.
View all posts by Richard Johnson →
This entry was posted in Remaking the Republicans. Bookmark the permalink.