Posted on February 6, 2011 by Richard Johnson

The Reagan Legacy In Three Lines 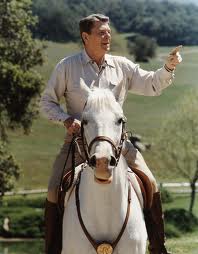 That ain’t bad. I am no longer alone. Others (many quite famous and respected) have now joined me in ranking President Reagan number three among the 43 men who held America’s 44 presidencies. Ironically, the two I have ahead of the Gipper also were born in February.

TV, Radio, Internet, Video —yes but books are the best.

You will be blessed and, perhaps, more effective in the challenging years ahead if you study this life. I heartily Recommend these four books from my library :

The Age of Reagan: The Conservative Counterrevolution 1980 – 1989 (Volume II) by Steven F. Hayward

On the Brink: The Dramatic Behind-the-Scenes Saga of the Reagan Era and the Men and Women Who Won the Cold War by jay Winik

Reagan In His Own Hand: The Writings of Ronald Reagan That Reveal His Vision for America Edited by Kiron K. Skinner, Annelise Anderson and Martin Anderson

“Above all, we must realize that no arsenal or no weapon in the arsenals of the world is so formidable as the will and moral courage of free men and women.” (1/20/81)

“[G]overnment’s view of the economy could be summed up in a few short phrases: If it moves, tax it. If it keeps moving, regulate it. And if it stops moving, subsidize it.” (8/15/86)

If  we had only one memory of President Reagan, it should be his 1964 speech, “A Time For Choosing.” When you watch it, be aware that, while he gave it more than 46 years ago, it is exactly the message we need for today. Today truly is a time for choosing.

You may know Governor Palin gave an address honoring President Ronald Reagan to the Young America’s Foundation Friday night. Go ahead and watch/hear her apply Reagan’s formula to our times.

Richard Johnson: a mature Christian who understands the sweep of history, the unique role of America and these times clearly and precisely.
View all posts by Richard Johnson →
This entry was posted in Reclaiming and Restoring America, Remaking the Republicans, This Great Awakening. Bookmark the permalink.