Governor Pawlenty ended his bid for the Presidency Sunday.

“This has been an incredible process, it has been a great honor for Mary and me. I’m very very grateful to the people of Iowa and this country who I had a chance to make my case to and the supporters and staff and friends who have been so loyal and helpful.” Governor Pawlenty told ABC’S Jake Tapper Sunday morning. “I congratulate Congresswoman Bachmann for her victory,” he said.

One of the fatal wounds to Pawlenty’s campaign may have been self-inflicted.

At the GOP debate on Aug. 11 at Iowa State University — in the same venue that would later house the straw poll—Pawlenty went after Bachmann’s record and accomplishments on stage after Fox News anchor Chris Wallace asked, “Is she unqualified, or is she just leading you in the polls?”

That caused Bachmann to retaliate in an exchange that many felt ultimately favored Bachmann, who took the opportunity to burnish her image as a fighter on principle.

This is an incorrect assessment. Governor Pawlenty’s testy attack on Congresswoman Bachmann was not a cause of the Pawlenty failure, it was a result. Clearly, Governor Pawlenty already knew his campaign was sunk or sinking. 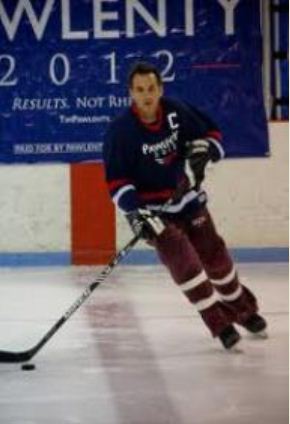 With 1.5 minutes remaining in a mythical hockey game between the Minnesota Pawlentys and the Minnesota Bachmanns, the Minnpaws are down 3-1. A whistle blows and the Minnpaws are assessed a (2 minute) penalty. Shorthanded, defenseman Tim sees Minnbachs star center, Michele, streaking across the blue line with the puck where he high-sticks her and slams her into the ice.

Ask Brian Sullivan, who Pawlenty beat in 2002 for the Republican endorsement for Governor, if Governor Pawlenty knows the game and the score or not. Do not think for one minute that Governor Pawlenty did not know what the score was or how much time was on the clock at the debate Thursday night.

Congresswoman Bachmann, while not a hockey fanatic, also knew the reason for the “high stick.” She also knew who won the “game” and she is moving up to the next contest. Here is her generous statement Sunday morning: “This morning I spoke with Gov. Pawlenty to express my respect and admiration for him, and to wish him and his family well. Running for president requires enormous self-sacrifice. Gov. Pawlenty brought an important voice and ideas to the campaign, and he served the people of Minnesota and our country well. Our party and our country are better as a result of his service and commitment.”

Pawlenty for United States Senate in 2012

Minnesota Senator Amy Klobuchar is up for Reelection in 2012. Senator Klobuchar is a friendly gracious woman. Anyone who has met her, as I have, can tell you she is personable and likable. Minnesotans do generally not vote against likable incumbents. And Klobuchar will have the left-wing Minnesota “lame stream media” working with organized labor for her—to say nothing of voter fraud.

Governor Pawlenty will campaign on and work in the Senate to Overturn Obamacare, pass real healthcare reform, see the restructuring and resizing of the United States Government and, one more thing, he’ll help take the restrictions off of America’s productive capacity. Pawlenty is a proven legislator. He was an effective Majority Leader of the Minnesota House of Representatives.

Governor Pawlenty may need a few days to unwind but he must consider the United States Senate.

Richard Johnson: a mature Christian who understands the sweep of history, the unique role of America and these times clearly and precisely.
View all posts by Richard Johnson →
This entry was posted in 2012. Bookmark the permalink.