WE KNOW GOVERNOR RICK PERRY PRAYS—BUT WHICH? TO THE CHRISTIAN GOD OR THE MUSLIM GOD?

We highly commended Governor Perry August 5 Here and August 7 Here for his bold leadership at The Response day of prayer and fasting in Houston, August 6, 2011.

We even reprinted Governor Perry’s opening prayer. He did not end the prayer in the name of Jesus Christ as most Christians have learned to do. Still, the prayer seemed solidly Christian. One could think Governor Perry addressed his prayer to the God of the Bible; the God of Christians and Jews. Could that thought have been wrong? Is it possibly a stealth application of Biblical language by a convert to Islam?

I do not make the charge about Governor Perry. But his conduct, the past 8 to 9 years, concerning Islam needs to be questioned and fully answered. We will not cover the range of questions in this post. Instead we will focus on Governor Perry’s actions to have Islam (An Ideology at war with the United States) taught in Texas public schools.

Many States have worked to restore the “Public Schools” to the time when they gave children a vigorous and generally factual education. That happened here in Minnesota as we battled the administrations of Governors Arnie Carlson and Jesse Ventura from 1991 to 2002 as they aggressively employed devices to diminish and destroy discipline and facts—notably through “Profiles in Learning.” Minnesota ended the “Profiles” and achieved significant restoration in 2003.

The restoration process started much earlier in Texas as Governor G. W. Bush began his reform in 1995. In 2001, the Texas schools were solidly teaching facts in most areas.

Things changed in Texas. Governor Perry met and became a close personal “friend of the Aga Khan, the religious leader of the Ismailis, a sect of Shia Islam that claims a reported 15 to 20 million adherents worldwide. Sprouting from that friendship are at least two cooperation agreements between the state of Texas and Ismaili institutions, including a far-reaching program to educate Texas schoolchildren about Islam.” (Salon Magazine, August 10, 2011) More from the Solon story:

Perry met the Aga Khan during a 2000 family trip to Paris (the Aga Khan owns a large estate, Aiglemont, north of the city), the Austin American-Statesman reported in 2008. Two years later, Perry spoke warmly at a dinner in Houston hosted by the Aga Khan. Over the years the governor attended other Ismaili events in Texas, culminating in a pair of formal agreements.

One, in 2009, provides for cooperation between Texas and the Aga Khan’s organizations in the “fields of education, health sciences, natural disaster preparedness and recovery, culture and the environment.” Perry was quoted at the official Ismaili website as saying at the signing ceremony that “traditional Western education speaks little of the influence of Muslim scientists, scholars, throughout history, and for that matter the cultural treasures that stand today in testament to their wisdom.”

. . . Sounds good. But Perry has been sucked into the propaganda vortex, and is now wielding his enormous power to influence changes in the schoolrooms and in the curricula to reflect a sharia compliant version of Islam. He is a friend of the Aga Khan, the multimillionaire head of the Ismailis, a Shi’ite sect of Islam that today proclaims its nonviolence but in ages past was the sect that gave rise to the Assassins. Perry has concluded at least two cooperation agreements between the state of Texas and the Ismailis, including a comprehensive program to feed children in Texas public schools and taqiyya nonsense about how Islam is a religion of peace. Another agreement stipulates that Texas officials will work with the Ismailis in the “fields of education, health sciences, natural disaster preparedness and recovery, culture and the environment.” Perry let on that this was all about whitewashing Islam’s bloody historical and modern-day record: “traditional Western education speaks little of the influence of Muslim scientists, scholars, throughout history, and for that matter the cultural treasures that stand today in testament to their wisdom.”

August 18, Geller, at her own Atlas Shrugs, wrote at length with detail about the Texas school systems muslin indoctrination program and linked to the actual Web Site for the complete San Antonio Independent School District Islam program. I reviewed the entire complete and very well done Site. You cannot. Within days, the Islam Program pages were taken down. But there is A cache system that stores all Web pages. However, those cached pages were also taken down. Before that happened, I downloaded:

Pamela has reproduced much of these lessons on Islam material at Atlas Shrugs here. 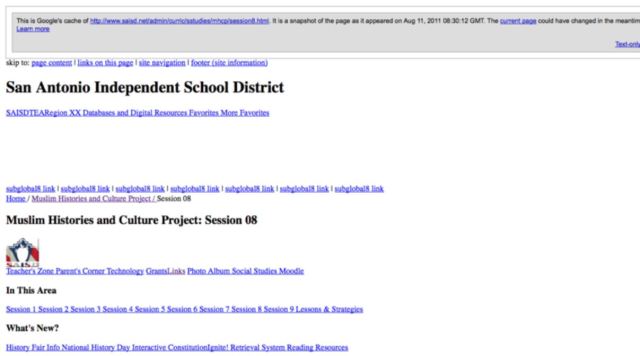 You can believe this mountain of evidence convicting Governor Perry or go with Politico, “Is Perry Dumb?”

Richard Johnson: a mature Christian who understands the sweep of history, the unique role of America and these times clearly and precisely.
View all posts by Richard Johnson →
This entry was posted in Defending Christianity, Jinad/Shariah, Reclaiming and Restoring America. Bookmark the permalink.