THE REAL OBAMA STATE OF THE UNION IN FOUR MINUTES

A statement of stubborn facts

A project that took years to reach fruition was finally ready for beginning construction in 2012 but was nixed by President Obama. 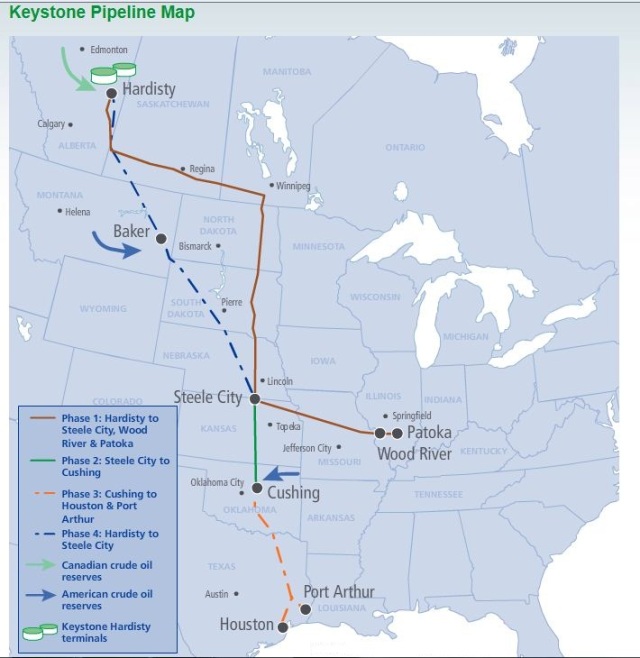 The $7 billion project would have created 20,000 new high paying jobs and diminished the challenge of dealing with Russian and Islamist control of the significant portion of international oil production. Now America’s position is weakened but China’s is strangthened. The biggest loss is the hundreds of billions all Americans will spend from now on because of higher fuel costs to move everything.

The reason is said to be President Obama had to satisfy the radical environmentalists. Maybe not. The case for crony capitalism is far more persuasive.

Let’s start with the domestic oil that would have been moved by the Keystone from North Dakota and other States. How will that crude now go to market? Railroads or more correctly, railroad. The BNSF railroad, owned by Obama’s crony capitalist Warren (I don’t pay enough taxes) Buffett.

It is telling that Buffett’s secretary was seated last evening next to Mrs. Obama. There are many ways Buffet could pay more taxes. Here are two. He could take a salary comparable to his executive stature—say $2 million per year instead of the practically nothing he takes. The simplest way is to just send the IRS $400,000 or whatever he thinks he is underpaying. Crony Buffett’s company, Berkshire Hathaway, has been in contention with the IRS for more than 14 years. At the end of 2010, Berkshire Hathaway carried a debt of more than $1 billion to the IRS.

The Obama Administration has acted aggressively to restrict America’s energy production across the board. Under Obama, America is now the only country that prohibits the development of new offshore oil and gas fields.

This is the single most disastrous law in American history. Businesses are already making costly decisions to face the onslaught of this evil choking of Liberty to say nothing of impending economic ruin. If this destructive weight is not lifted from the American people by 2014, there is no known way to stop this nation from becoming another Greece.

The National debt has increased $5 trillion in the past three years and is now greater than the American GDP. This debt run-up will not end soon under the best of circumstances. It will take a generation of hard work to correct this national disaster.

A nation that was on the verge of achieving Dr. MLK’s dream has now been cast down into a race war. If you object to the CBC/NAACP takers hand in your pocket, you are a racist. Odds are bad against Eric Holder, the race war general but much better for ACORN/SEIU as the co-command of the class war on the makers in America.

The Islamization of America . . .

is now proceeding at a pace more than 10 times the rate under President Bush. Speakers are now regularly canceled or contracted venues denied over some trumped up charge by some Muslim Student group or CAIR. Jews are being discriminated against on University campi (campuses for you hobbits)—often violently to mollify aggressive Muslim student demands.

Russia is proceeding as if America is no longer a force to be dealt with. Ditto China. The Islamists leading the OIC firmly believe they can proceed at all deliberate speed in defeating and destroying Israel, America and Western Civilization. Obama did not resist the “Arab Spring,” he aided it. The world will suffer the hideous results of the “Arab Spring” for generations. One example is Egypt.

Egypt is now firmly governed by the Islamist Muslim Brotherhood. Christians are being killed and burned out. Christians have been continuously present in Egypt since the first century. They will be killed or driven out within five years. Egyptian policy in now anti-Israel. Egypt will now be a force in the pressure —not to preserve Israel— but to destroy her. And Shariah law is now being put in place fully in Egypt including the enslavement of women. Cliterectomies have already been approvingly declared legal.

Richard Johnson: a mature Christian who understands the sweep of history, the unique role of America and these times clearly and precisely.
View all posts by Richard Johnson →
This entry was posted in 2012, Drill Here Drill now, Israel, Jinad/Shariah, Liberals Deatroying America, Obama, Obama's America: Racism, The Cost of Democrats, World Events. Bookmark the permalink.