Perhaps you thought “spreading the wealth around” meant taking from the “1%.” No, no, no! True Socialism (see the French Revolution) takes from the 99% rabble and gives to the king. Who knew it could be this funny.

“Got a birthday, anniversary, or wedding coming up?

Let your friends know how important this election is to you—register with Obama 2012, and ask for a donation in lieu of a gift. It’s a great way to support the President on your big day. Plus, it’s a gift that we can all appreciate—and goes a lot further than a gravy bowl.

Setting up and sharing your registry page is easy—so get started today.” 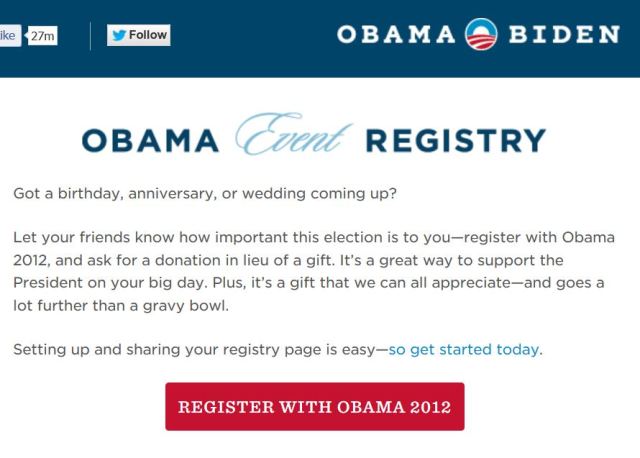 Those who click on the “get started” link will find registering their event is as easy as this Egyptian Presidential election winner has. 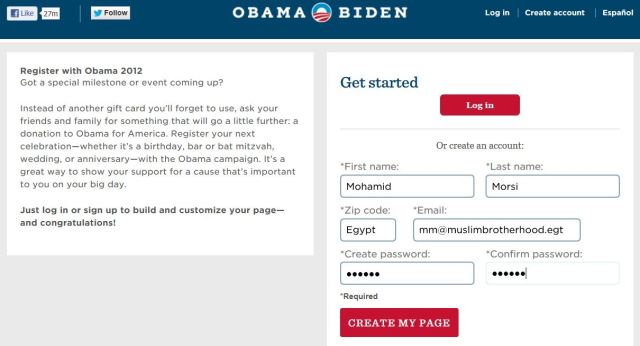 The starter ideas are “birthday, anniversary and wedding.” I know a couple who must be just sick. Their 50th anniversary was yesterday. What better way to memorialize their lives together than to have their friends and children send money to the *king? It is too late for them but what about you? Getting married? Now is your chance to “make a difference.” Consider inviting 1000 guests. Perhaps their “gifts” to the king will average $75. You can feed them (down and dirty) for $40 each. Your cost: $40,000. The king’s take: 75,000. What could be more fair than that?

There are, of course, endless ways to do your part. In the above example, you noticed the new Islamist President of Egypt, The Muslim Brotherhood’s Mohamed Morsi, is apparently anxious to send his spoils to the king. It remains to be revealed how you would send looting, burning and raping.

*Regular readers of The Patriot’s Trumpet would expect an image of “King Obama.” Here is a better idea, just Google “king Obama” and click on images. Enjoy!