LIBERTY LIST 2012 —THE UNIQUE AMERICAN PATRIOT THEN AND NOW

A typical definition for patriot is, “A patriot is someone whom feels or voices expressions of support for their country.” This works for every patriot around the world and across history except the American patriot. Every other country was founded

on tribe or land or both. America was and is an idea—individual God given liberty. The patriot of every nation can sing, “My country tis of thee,” but only the American patriot can sing, “Sweet land of liberty.”

But events this week have demonstrated more clearly than ever before our generation of patriots may be required to walk in the footsteps of those Revolutionary patriots. As we approach this 236th anniversary of our American Independence Day, let us remember the morning of April 19, 1775, British Major Pitcairn shouted to an assembled regiment of Minutemen at Lexington; “Disperse, ye villains, lay down your arms in the name of George the Sovereign King of England.” The immediate response of regiment commander Reverend Jonas Clarke was: “We recognize no Sovereign but God and no King but Jesus.” That battle cry soon rang throughout the colonies. The American revolutionaries of the late 18th Century faced tyranny. And we face tyranny. Our “sweet land of liberty” is at risk and our house is as divided as Lincoln found it in 1860.  Our time requires patriots such as Samuel Adams of Massachusetts and Patrick Henry of Virginia. 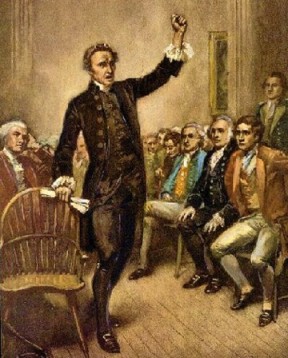 None in America are more important that the men and women who become the 2012 Liberty List. Whether you are a 21st Century Patrick Henry or a minuteman of our time, you are just as indispensable. Get ready and be inspired now by the closing arguments of Patrick Henry’s speech in the St John’s Church in Richmond Virginia nearly a month before the battle of Lexington and Concord:

They tell us, sir, that we are weak; unable to cope with so formidable an adversary. But when shall we be stronger? Will it be the next week, or the next year? Will it be when we are totally disarmed, and when a British guard shall be stationed in every house? Shall we gather strength by irresolution and inaction? Shall we acquire the means of effectual resistance, by lying supinely on our backs, and hugging the delusive phantom of hope, until our enemies shall have bound us hand and foot? Sir, we are not weak if we make a proper use of those means which the God of nature hath placed in our power. Three millions of people, armed in the holy cause of liberty, and in such a country as that which we possess, are invincible by any force which our enemy can send against us. Besides, sir, we shall not fight our battles alone. There is a just God who presides over the destinies of nations; and who will raise up friends to fight our battles for us. The battle, sir, is not to the strong alone; it is to the vigilant, the active, the brave. Besides, sir, we have no election. If we were base enough to desire it, it is now too late to retire from the contest. There is no retreat but in submission and slavery! Our chains are forged! Their clanking may be heard on the plains of Boston! The war is inevitable²and let it come! I repeat it, sir, let it come.

It is in vain, sir, to extenuate the matter. Gentlemen may cry, Peace, Peace²but there is no peace. The war is actually begun! The next gale that sweeps from the north will bring to our ears the clash of resounding arms! Our brethren are already in the field! Why stand we here idle? What is it that gentlemen wish? What would they have? Is life so dear, or peace so sweet, as to be purchased at the price of chains and slavery? Forbid it, Almighty God! I know not what course others may take; but as for me, give me liberty or give me death!

Richard Johnson: a mature Christian who understands the sweep of history, the unique role of America and these times clearly and precisely.
View all posts by Richard Johnson →
This entry was posted in Liberty List 2012. Bookmark the permalink.