(Pray for the next 28 days; pray for America then show your character with your vote November 6th, 2012.)

Yesterday we brought you the “bombshell.” The Obama campaign solicited received and covered up a massive total in illegal foreign campaign contributions. All this discovered and revealed by two American patriots, Peter Schweitzer and Steve Bannon at their CampaignFundingRisks.com.

Now this; free phones to the “community organized,” huge easy profits for Obama bundlers and the taxpayer stuck with the bill.

Was all this out in the open? No, no this is another scandal of lawlessness and cover up. This is a classic example of Obama “helping the poor” and spreading the wealth around.” It could be out in the open if it was simply taxing your earnings and “redistributing” it to the “designated poor.”  But the real under the table “redistribution” goes from you, an ordinary middle class taxpayer to filling the deep pockets of Obama bundlers. In this case, some of the money Obama slid found its way right into the pocket of the world’s richest man. Do you understand “spreading the wealth” better now? Can you see the real need for a cover up? No problem for those who do it almost as a matter of standard operating procedure. Just call it all “Organizing for Phones.”

Andrew Stiles writing at the Washington Free Beacon explains how it went down:

A wireless company profiting from the so-called “Obama phone” giveaway program is run by a prominent Democratic donor whose wife has raised more than $1.5 million for the president since 2007.

Last week a video of a President Barack Obama supporter in Ohio claiming to have received a free phone from the president—“[Obama] gave us a phone!”—went viral, prompting media outlets to investigate.

Since 1985 the Federal Communications Commission (FCC) has operated a program called Lifeline, originally designed to provide free landline phone service for low-income individuals. Thegovernment subsidizestelecommunications firms providing the service, and those firms also pass on costs to customers via the “Universal Service Charge” on their phone bills. 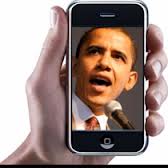 The program expanded to include cell phones in 2008. That change hasrapidly increased the cost to the federal government—$1.6 billion in 2011, up from $772 million in 2008. The number of Lifeline beneficiaries rose from 7.1 million to 12.5 million during the same period; cell phones account for roughly half of that 12.5 million.

One of the major providers of the free cell phones—3.8 million subscribersas of late 2011—is Miami-based TracFone Wireless, a company whose president and CEO, Frederick “F.J.” Pollak, has donated at least $156,500 to Democratic candidates and committees this cycle, including at least $50,000 to the Obama campaign.

Pollak’s wife, Abigail, is a campaign bundler for Obama who has raised more than $632,000 for the president this cycle, and more than $1.5 million since 2007. She has personally contributed more than $200,000 to Democratic candidates and committees since 2008.

The Pollaks hosted Obama at their Miami Beach home in June for a $40,000-per-plate fundraising dinner, and hosted a similar event with Michelle Obama in July 2008. The couple personally donated a combined $66,200 to Obama’s reelection effort that year.

Visitor logs indicate that Frederick and Abigail Pollak have visited the White House seven times. In 2009, the president appointed Abigail to serve on the “Commission to Study the Potential Creation of a National Museum of the American Latino.”

TracFone, a direct financial beneficiary of the Lifeline program, receives $10 a month for each subscriber in the form of federal subsidies. The company can make an additional profit selling extra minutes to Lifeline subscribers who exceed their monthly allowance of 250 prepaid minutes.

TracFone and other wireless providers claim that revenue from selling additional minutes to Lifeline customers is low, but decline to publicly release such figures.

The program’s rapidly increasing costs have attracted the attention of Republicans and Democrats in Congress, and have prompted calls for reform. Sen. Claire McCaskill (D., Mo.), for example, found that the program was “ripe for fraud.” In some cases, McCaskill noted in a December 2011 press release, the government was issuing multiple free phones to the same individuals.

“I remain troubled by the expansive potential for the program to be abused, especially since Americans contribute to the program through their monthly phone bills,” McCaskill, who is up for reelection, wrote in a formal letter to the FCC. “The current requirements to determine eligibility often do not require customer documentation for participation in Lifeline, which may result in individuals receiving phones who should not be.”

Rep. Tim Griffin (R., Ark.) has introduced legislation to restore the program to its originally intended purpose—providing landlines for use in emergencies—and stop the federal government from issuing free cell phones. Griffin told the Daily Caller he had heard reports of individuals receiving dozens of phones, some of which were of the expensive smartphone variety.

The FCC in response to such pressure announced in February 2012 to reform the program and “reduce the potential for fraud while cutting red tape for consumers and providers.”

Richard Johnson: a mature Christian who understands the sweep of history, the unique role of America and these times clearly and precisely.
View all posts by Richard Johnson →
This entry was posted in 2012, Lawless Government, Obama, The Cost of Democrats. Bookmark the permalink.