MILLIONS ARE JOINING BILLY GRAHAM—TAKING A STAND THIS ELECTION—WHAT ABOUT YOU?

The challenges were much greater; the odds much longer when this nation was founded. We know the men and women of that time possessed the character, confidence, commitment, integrity and faith to persevere, persist and prevail. Billy Graham is clearly one of God’s greatest servants of the 20th Century. He never got involved in electoral politics until now. At age 94 He is taking a stand for the first time. He asks Americans to join him and leave a legacy of life, Liberty, the Biblical definition of marriage and in standing with Israel.

Dr. Graham released his simple message October 18th as bulletin inserts and posters. That day, his message ran as full page advertisements in three newspapers including the Wall Street Journal. Here is Dr. Graham’s challenge to millions and to you:

Update: (November 4, 2012) This actually appeared in dozens of newspapers in several states. 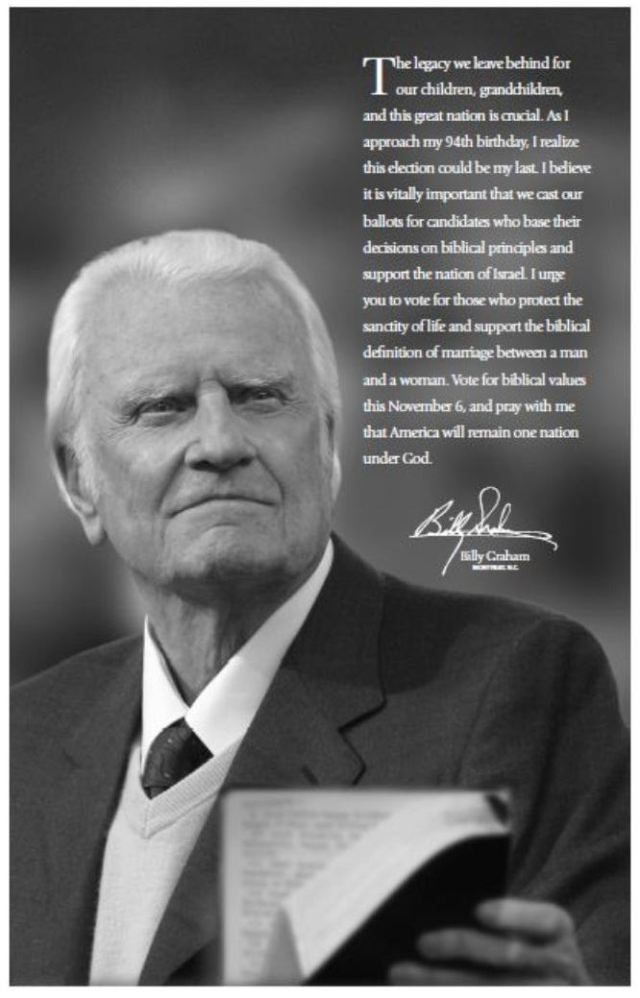 (Pray for the next 7 days; pray for America then show your character with your vote November 6th, 2012.)

Richard Johnson: a mature Christian who understands the sweep of history, the unique role of America and these times clearly and precisely.
View all posts by Richard Johnson →
This entry was posted in 2012, Character, Christian life and service, Defending Christianity, Engaging the culture, Reclaiming and Restoring America. Bookmark the permalink.