235 YEARS AFTER THE FIRST NATIONAL THANKSGIVING, IT IS ALL THE MORE OUR INDEFENSIBLE DUTY AS AMERICANS TO WORSHIP GOD WITH ADORATION AND GRATITUDE

In this present time of darkness in the world with the commitment to Christ gone from Europe and waning in America, let us recall that first National Thanksgiving Proclamation and recommit ourselves to His purpose and His service.

The first Thanksgiving Proclamation, November 1, 1777, by the Continental Congress

FORASMUCH as it is the indispensable Duty of all Men to adore the superintending Providence of Almighty God; to acknowledge with Gratitude their Obligation to him for Benefits received, and to implore such farther Blessings as they stand in Need of: And it having pleased him in his abundant Mercy, not only to continue to us the innumerable Bounties of his common Providence; but also to smile upon us in the Prosecution of a just and necessary War, for the Defense and Establishment of our unalienable Rights and Liberties; particularly in that he hath been pleased, in so great a Measure, to prosper the Means used for the Support of our Troops, and to crown our Arms with most signal success:
It is therefore recommended to the legislative or executive Powers of these UNITED STATES to set apart THURSDAY, the eighteenth Day of December next, for SOLEMN THANKSGIVING and PRAISE: That at one Time and with one Voice, the good People may express the grateful Feelings of their Hearts, and consecrate themselves to the Service of their Divine Benefactor; and that, together with their sincere Acknowledgments and Offerings, they may join the penitent Confession of their manifold Sins, whereby they had forfeited every Favor; and their humble and earnest Supplication that it may please GOD through the Merits of JESUS CHRIST, mercifully to forgive and blot them out of Remembrance; That it may please him graciously to afford his Blessing on the Governments of these States respectively, and prosper the public Council of the whole: To inspire our Commanders, both by Land and Sea, and all under them, with that Wisdom and Fortitude which may render them fit Instruments, under the Providence of Almighty GOD, to secure for these United States, the greatest of all human Blessings, INDEPENDENCE and PEACE: That it may please him, to prosper the Trade and Manufactures of the People, and the Labor of the Husbandman, that our Land may yield its Increase: To take Schools and Seminaries of Education, so necessary for cultivating the Principles of true Liberty, Virtue and Piety, under his nurturing Hand; and to prosper the Means of Religion, for the promotion and enlargement of that Kingdom, which consisteth “in Righteousness, Peace and Joy in the Holy Ghost.”

And it is further recommended, That servile Labor, and such Recreation, as, though at other Times innocent, may be unbecoming the Purpose of this Appointment, be omitted on so solemn an Occasion.

General Orders to Give Thanks 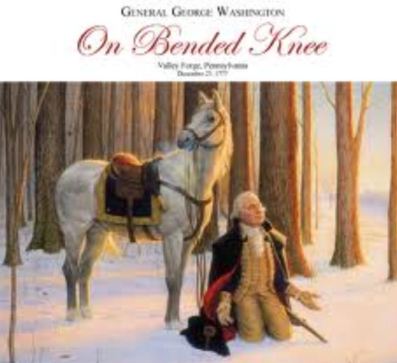 The Commander-in-Chief with the highest satisfaction expresses his thanks to the officers and soldiers for the fortitude and patience with which they have sustained the fatigues of the Campaign. Altho’ in some instances we unfortunately failed, yet upon the whole Heaven hath smiled on our Arms and crowned them with signal success; and we may upon the best grounds conclude, that by a spirited continuance of the measures necessary for our defence we shall finally obtain the end of our Warfare, Independence, Liberty and Peace. These axe blessings worth contending for at every hazard. But we hazard nothing. The power of America alone, duly exerted, would have nothing to dread from the force of Britain. Yet we stand not wholly upon our ground. France yields us every aid we ask, and there are reasons to believe the period is not very distant, when she will take a more active part, by declaring war against the British Crown. Every motive therefore, irresistibly urges us, nay commands us, to a firm and manly perseverance in our opposition to our cruel oppressors, to slight difficulties, endure hardships, and contemn every danger. The General ardently wishes it were now in his power, to conduct the troops into the best winter quarters. But where are these to be found ? Should we retire to the interior parts of the State, we should find them crowded with virtuous citizens, who, sacrificing their all, have left Philadelphia, and fled thither for protection. To their distresses humanity forbids us to add. This is not all, we should leave a vast extent of fertile country to be despoiled and ravaged by the enemy, from which they would draw vast supplies, and where many of our firm friends would be exposed to all the miseries of the most insulting and wanton depredation. A train of evils might be enumerated, but these will suffice. These considerations make it indispensibly necessary for the army to take such a position, as will enable it most effectually to prevent distress and to give the most extensive security; and in that position we must make ourselves the best shelter in our power. With activity and diligence Huts may be erected that will be warm and dry. In these the troops will be compact, more secure against surprises than if in a divided state and at hand to protect the country. These cogent reasons have determined the General to take post in the neighbourhood of this camp; and influenced by them, he persuades himself, that the officers and soldiers, with one heart, and one mind, will resolve to surmount every difficulty, with a fortitude and patience, becoming their profession, and the sacred cause in which they are engaged. He himself will share in the hardship, and partake of every inconvenience.

Tomorrow being the day set apart by the Honorable Congress for public Thanksgiving and Praise; and duty calling us devoutely to express our grateful acknowledgements to God for the manifold blessings he has granted us. The General directs that the army remain in its present quarters, and that the Chaplains perform divine service with their several Corps and brigades.

Richard Johnson: a mature Christian who understands the sweep of history, the unique role of America and these times clearly and precisely.
View all posts by Richard Johnson →
This entry was posted in 2012, Celebrating America, Character, Christian life and service, Defending Christianity, Reclaiming and Restoring America, This Present Darkness. Bookmark the permalink.