FIRST REACTIONS TO PRESIDENT OBAMA’S “SAVE THE CHILDREN” CAMPAIGN

In his remarks yesterday, prior to signing 23 Executive Orders, President Obama declared, “[W]hat we should be thinking about, is our responsibility to care for [the children], and shield them from harm, and give them the tools they need to grow up, and do everything that they’re capable of doing. Not just to pursue their own dreams, but to help build this country. This is our first task as a society, keeping our children safe. This is how we will be judged.”

The President had a perfect array of human props on hand including four young letter writers who had implored the President to “keep us safe.” (None were as old as Amy Carter who was 13 when President Carter sought her foreign policy advice.) Here they are, from left to right, Hinna Zeejah ,8, Taejah Goode, 10, Julia Stokes, 11, and Grant Fritz, 8. 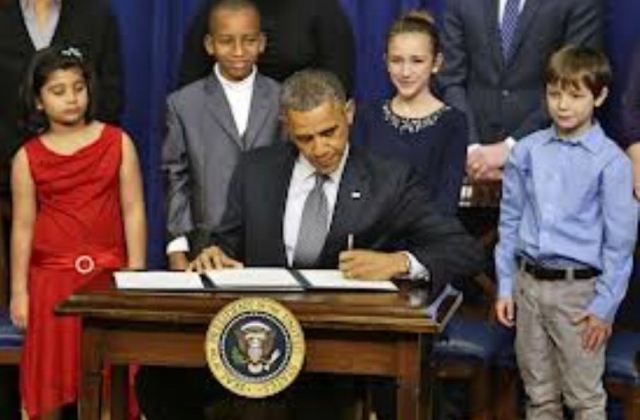 One need not do research here. There must have been thousands of busy-body government school union activists (formerly known as teachers) who whipped their classrooms into a State of Fear and had them each write to the only one who can save us all, President Obama. It was President Obama’s lucky diversity day. The four letters selected as representative of tens of thousands included two girls and two boys and more than that, two white children (a boy and a girl), a black boy, and an Arab (?) girl! How great is that?

Here is my own first reaction. This is not at all about “saving the children.” This is about extending Federal power into every life. The government now has detailed knowledge of and control over every citizen’s financial and health information. “Saving the children” is the mechanism to establish the power to control. Each of us must be subject to raw Federal power like this (6 year old Elián González seized by Clinton jack booted thugs April 22, 2000):

One individual, Adam Lanza, who should have been as easy for the local community to spot as Jared Loughner should have been by Sheriff Clarence Dupnik in Tuscan. Lanza tragically killed 26 including 20 children. This image is the result of Lanza’s final act:

President Obama’s plan clearly shows he wants to end your right to bear arms and project Federal power into your daily life right into your closet all in the name of saving the children. What if you and other Americans resist? We have some experience with that. The Branch Davidian cult at Waco Texas was a far less perverted religion than, say, Islam. But when they resisted the Clinton BATF push, Janet Reno’s FBI invaded. 54 men and women and 28 children were consumed in flames at the hands of Federal power. This scene may become common in the coming months as a result of the Presidents power grab.

Many are prepared to stand up to this power grab including:

Linn County Oregon Sheriff Tim Mueller  who cut right to the chase in an open letter to Vice President Biden on January 14:  “Any federal regulation enacted by Congress or executive order … offending the constitutional rights of my citizens will not be enforced by me or my deputies.”

Jackson County Kentucky Sheriff Denny Peyman  made it clear that gun laws which violate the United States Constitution or the Kentucky Constitution will not be enforced in his county.

The Wyoming legislature is enacting a law to nullify any new federal infringements on the constitutionally protected gun rights of state residents who enjoy some of the lowest crime rates while being among the most heavily armed people in America. Unconstitutional federal gun registration schemes, as well as restrictions on semi-automatic guns or standard-capacity magazines, would be nullified under the legislation.

There are teeth in the proposed law too: Any federal official attempting to enforce unconstitutional statutes or decrees infringing on gun rights passed after January 1 of this year would be charged with a felony.

Texas has legislation moving to match the Wyoming act and will stand “shoulder to shoulder” with Wyoming.

There was an Expo Idaho gun show in Boise last Saturday, January 12. The

Organizer, Paul Snider, said sales were through the roof. “These guns and ammo are going out the door in arm loads. Some people can hardly walk they’ve got so much stuff,”

In South Dakota, Michael Mooney, owner of Southern Hills Tactical in Custer, says the demand for firearms is unprecedented saying he sold 85 assault weapons ranging from $650 dollars to $3,000 dollars in just three days.  “Never seen sales like this at all. In the month of December there was nearly 2.8 million sales transfers done though NICS, which is roughly a million more than the previous December,” Mooney told KOTA-TV News.

In Kentucky, TV-14 is reporting gun sales so brisk across the State that store shelves are often left bare.

And according to WTVR-TV, Richmond, lines stretched for hundreds of yards throughout the parking lot comprised of gun enthusiasts wanting to browse the latest technology or stock up on ammunition the first day of the C&E Gun Show in Central Virginia.

Our old buddy, Glen Beck declares, “Make no mistake … a fight is coming.”

This insight from former Arizona sheriff Richard Mack is worthy of study and reflection. Please find the 7 minutes now:

Update: (22:35 GMT) I just got this important statement from Texas Governor Rick Perry:

“The Vice President’s committee was appointed in response to the tragedy at Newtown, but very few of his recommendations have anything to do with what happened there.

“Guns require a finger to pull the trigger. The sad young man who did that in Newtown was clearly haunted by demons and no gun law could have saved the children in Sandy Hook Elementary from his terror.

“There is evil prowling in the world – it shows up in our movies, video games and online fascinations, and finds its way into vulnerable hearts and minds. As a free people, let us choose what kind of people we will be. Laws, the only redoubt of secularism, will not suffice. Let us all return to our places of worship and pray for help. Above all, let us pray for our children.

“In fact, the piling on by the political left, and their cohorts in the media, to use the massacre of little children to advance a pre-existing political agenda that would not have saved those children, disgusts me, personally. The second amendment to the Constitution is a basic right of free people and cannot be nor will it be abridged by the executive power of this or any other president.”

Richard Johnson: a mature Christian who understands the sweep of history, the unique role of America and these times clearly and precisely.
View all posts by Richard Johnson →
This entry was posted in 2013, A Criminal Enterprise, Defend the Right to Bear Arms, Lawless Government, Obama, This Present Darkness. Bookmark the permalink.