Yesterday we introduced you to E. W. Jackson, an emerging leader with an exciting vision for America.  At the same time, the left wing media tried to marginalize Bishop Jackson with charged characterizations such as “bigot” from the Huffington Post. That later. First, the New York Times called Jackson a “beguiling extremist.” 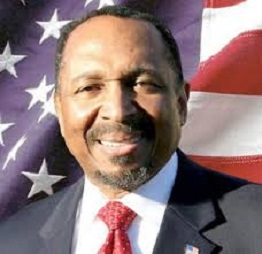 I took an oath in August of 1970 in the United States Marine Corps to the Constitution of the United States that I would preserve protect and defend it against all enemies foreign and domestic and bear true faith and allegiance to the same.  That oath never had an expiration date, and included in that oath is something called the tenth amendment to that constitution which said that the Commonwealth of Virginia is a sovereign state.

We in Virginia still hold these truths to be self evident, that all men are created equal and endowed by our Creator with such inalienable rights, that among these are life, liberty and the pursuit of happiness.  And so, we stand up…

Ronald Reagan said freedom is never more than one generation from extinction.  We do not pass it on to our children in the bloodstream.  It must be fought for and protected and passed on to them to do the same or we will spend our sunset years telling our children that the United States of America where once men were free.  That’s not our vision.

Our vision is captured in my favorite patriotic hymn.  My country tis of thee, sweet land of liberty, of thee I sing.  Land where my fathers died, land of the Pilgrim’s pride, from every mountainside let freedom ring.  And because this is my vision for our country, I am proud to say that I am not an African-American, I am an American.

Perhaps this is the extremism:

This is our vision.  This is our hope.  This is what I will fight for as your next Lieutenant Governor.  Will you fight with me?

From the Southwest to the Northern Neck from Hampton Roads to NoVA, will you fight with me?  And we will not only win the election in November.  We will win the hearts and minds of our people, and we will save this Commonwealth and save this country.  God will show us the way, but Virginia must lead the way, and let liberty light the way.

God Bless you, God bless the Commonwealth of Virginia, and God Bless the United States of America!

The Huffington Post is obviously dedicated to killing little babies

The Huffington Post headlined Jackson as a “VA Bigot” because he said, “Planned Parenthood had been more harmful to African-Americans than the Ku Klux Klan”—a very peculiar use of the word bigot. This source estimates from 1865 to 1973 the Klan killed 1,937 people; about 85% were black and 15 % white. Others, perhaps hundreds of thousands were injured or intimidated by the Klan.

On the other hand, according to figures released by Planned Parenthood, PPA legally murdered 333,964 babies in 2011 alone. While we know the legal slaughter was about 20% higher in the first 25 years, let’s just for the sake of a comparative number, round the 2011 figure down to 333,000 and use the number as conservatively representative of Planned Parenthood’s deadly rampage.

This low estimate means PPA has slaughtered 13,320,000 of God’s children; not to mention the damaged souls of millions of women. Granted, black babies account for far less than 85% of the total murdered. Currently blacks account for an all time high of 40% of babies legally killed in America. Let’s set the 40 year average at a modest 30% for blacks or 4,000,000 little black babies compared to 1,650 black people of all ages killed by the Klan—2425 to one killed by PPA in only 40 years.

It is profoundly clear who the bigots are. Go Virginia, elect a great team to lead your state and influence America; Ken Cuccinelli for Governor and E. W. Jackson for Lt. Governor.

Richard Johnson: a mature Christian who understands the sweep of history, the unique role of America and these times clearly and precisely.
View all posts by Richard Johnson →
This entry was posted in 2013, American leadership, Old and Done Media, Reclaiming and Restoring America, Vision. Bookmark the permalink.