PRIDE PRESIDENT: BRING THE GAY LITTLE CHILDREN UNTO ME

Perhaps you hadn’t heard, The White house and President Obama celebrated LGBT Pride month Thursday with “members and allies of the LGBT community.” 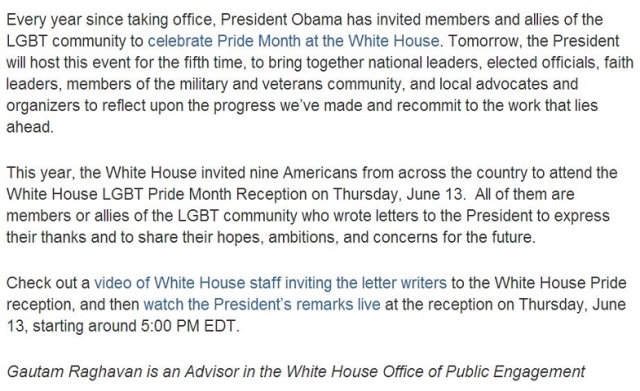 Unlike tours of regular school children, there was plenty of money for this. Those mean Republicans did not attack this historic event with their sequester. It was the 5th time this “community” has been together in the White House. The part of “The Community” that got into the shindig included, “national leaders, elected officials, faith leaders, members of the military and veterans community, and local advocates and organizers.” And one more group, homosexuals with children, who had written the President, were select to be there as well. A pair of third graders with “two moms who love us a lot,” were chosen to introduce Obama. Take a look:

The President, apparently unable to find the meaning of love in the words of Jesus or Second Corinthians 13, found it in a letter from two North Dakota lesbians. Among other things, President Obama said,

Love is what I saw in Valerie and Diane’s letter from North Dakota, who’ve been together for 37 years.  Their son, Madison, is here, 14.  They told me that when Madison was little—he’s not little now, by the way.  (Laughter.)  He used to say that someday, he was going to become president and make it legal for his moms to get married.  And now, they added, “I don’t think we’re going to have to wait that long.”  (Applause.)

Madison, I agree with you that it’s time.  I agree that you should run for president.  (Laughter.)  And I agree that we’re not going to have to wait that long—because from Minnesota to Maryland, from the United States Senate to the NBA, it’s clear we’re reaching a turning point.  (Applause.)  We’ve become not just more accepting; we’ve become more loving, as a country, and as a people.  Hearts and minds change with time.  Laws do, too.  Change like that isn’t something that starts here in Washington, but it’s something that has the power that Washington has a great deal of difficulty resisting over time.

In another important post today we have Rush and Ann Barnhardt commenting on the core thing that is bringing (or has brought) America down. They are both right in the context of their argument but no one can comprehend, let alone calculate, the destruction ahead from accepting homosexuality as a virtue and the definition of love..

Richard Johnson: a mature Christian who understands the sweep of history, the unique role of America and these times clearly and precisely.
View all posts by Richard Johnson →
This entry was posted in America the pitiful, New Gay America, Obama Age of Darkness, State of Obama's America. Bookmark the permalink.