President Obama called the growing list of scandals in his administration “Phony” Wednesday, July 24. He repeated the charge again the next day. We will measure the charge against each scandal. Today it is Benghazi 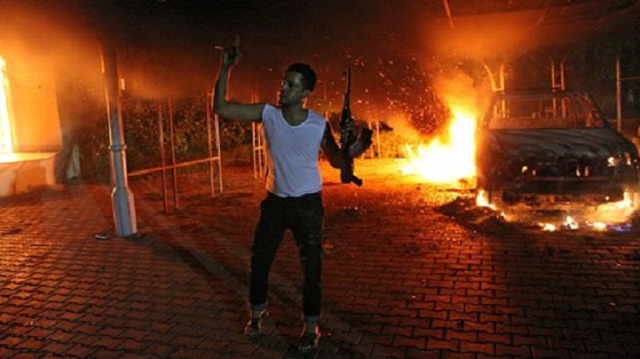 We know President Obama’s decisions to conduct the Benghazi gun running operation and, when the compound was attacked by terrorists, go to bed leaving the Americans to fend for themselves, and lead a cover-up seems a scandal to many including the families of the four Americans left behind dead.

Christopher Stevens was the first U.S. Ambassador killed on duty in more than 30 years. His grieving family has not been publicly critical of President Obama or Secretary Clinton. All Americans have grieved for the loss of Stevens. But we should remember his mission is the reason for the cover-up of Benghazi. While not covered by the fraud Big Media, we knew before the end of 2012 that Stevens was the Administration’s point man running guns to (al Qaeda connected) rebels in Libya and then Syria. Stevens’ autopsy was not released but we know he did not die of smoke inhalation.

Ambassador Stevens died of beating, torture and, by accounts, sodomy

Sean Smith was the Information Manager for the U.S. Foreign service in Benghazi. While the President called Benghazi a phony scandal, he has said “When four Americans get killed, it’s not optimal,” and “There are going to be bumps in the road.”   Smith’s mother, Pat Smith said, “I don’t believe him anymore. He’s wrong. My son is dead. How could that be phony?”  She also said President Obama has never revealed what, if anything, he was doing while workers at the Benghazi embassy were urgently requesting support, nor has the administration explained why no forces were sent to protect the embassy. 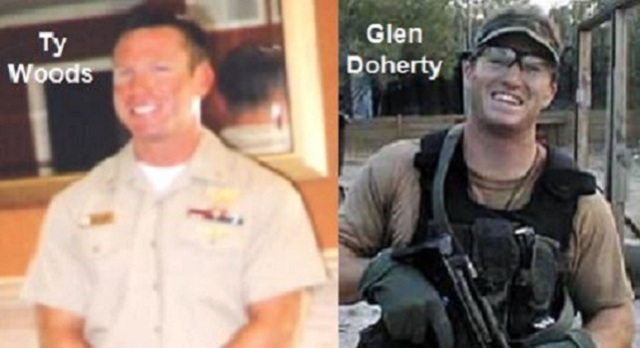 Ty Woods and Glen Doherty were former Navy Seals employed by the CIA. While Smith had been killed and Stevens was dragged out of the “mission” by Islamists to be tortured and killed later, Woods, Doherty and a Diplomatic Security Agent, David Ubben, were able to rescue some twenty other Americans before Woods and Doherty were killed and Ubben was critically wounded. Ubbens is still recovering in Walter Reed Hospital in suburban Washington. Just last Memorial Day Woods and Doherty were memorialized at the Navy’s Mt. Soledad Memorial Wall near San Diego, CA. “Glen and Ty were the kind of men this country is proud to produce as citizens and as warriors,” said keynote speaker Navy Seal Captain, Jason Ehret. “That fateful night in Benghazi, they did what I expect any SEAL would have done. … They ran to the sound of gunfire.” You’ll want to see the response from the Doherty and Woods families:

We agree, Mrs. Woods, your husband and the others, making a difference with their heroism that night, September 11, 2012, certainly answered the question, “What difference does it make?” and no, Mrs. Woods, they are not “bumps in the road.” And Mr. President, while you may be running a phony scam on America, Benghazi is not a phony scandal.

Richard Johnson: a mature Christian who understands the sweep of history, the unique role of America and these times clearly and precisely.
View all posts by Richard Johnson →
This entry was posted in Benghazi, Lawless Government, Scandal. Bookmark the permalink.