He came to Montgomery, AL in 1955 to defend Rosa Parks by effectively leading a boycott of the Buses.

He had been in Jail before—in Atlanta in 1960, for example.

1963 would be a providentially pivotal year. Dr. King went to Birmingham, AL in April where he was arrested and jailed for a (specifically peaceful) march. Twelve prominent white pastors published a newspaper article decrying Dr. Kings timing and tactics. Learning about their argument, King wrote them a 7000 word letter defending the cause, tactics and timing. Parts of it were soon published titled, A Letter From A Birmingham Jail. It was a big time game changer.

This last paragraph is a fair representation:

“I hope this letter finds you strong in the faith. I also hope that circumstances will soon make it possible for me to meet each of you, not as an integrationist or a civil rights leader, but as a fellow clergyman and a Christian brother. Let us all hope that the dark clouds of racial prejudice will soon pass away and the deep fog of misunderstanding will be lifted from our fear-drenched communities and in some not too distant tomorrow the radiant stars of love and brotherhood will shine over our great nation with all their scintillating beauty.

Yours for the cause of Peace and Brotherhood,

You can read it here.

A profoundly effective and righteous leader of the NAACP in Mississippi, Medgar Evers, who was clearly as important as Dr. King and seemed to have a similar destiny, was murdered—assassinated—June 12, just two and a half months before the march on Washington August 28—and King’s I Have A Dream speech.

Some 250,000 people went to Washington from across America to take their place in a great movement to gain equality of freedom and justice in America without regard to race. There were other speakers. They have been forgotten. Dr. King’s speech was a history changer. It challenged the American establishment in a manner that would be effective still today. It challenged black (Negro) Americans to find their freedom and justice on the high road. It encouraged white—no all—Americans to join in Christian brotherhood. 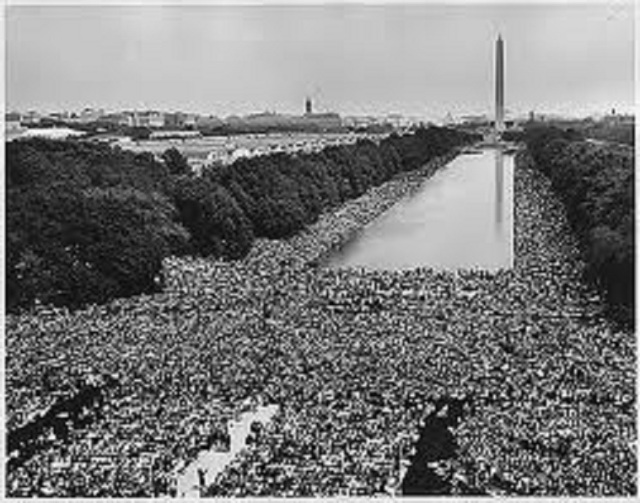 This speech began like so many others then quickly it lurched into something special and profound for America (and all of mankind):

I am happy to join with you today in what will go down in history as the greatest demonstration for freedom in the history of our nation.

Five score years ago, a great American, in whose symbolic shadow we stand today, signed the Emancipation Proclamation. This momentous decree came as a great beacon light of hope to millions of Negro slaves who had been seared in the flames of withering injustice. It came as a joyous daybreak to end the long night of their captivity.

“But there is something that I must say to my people who stand on the warm threshold which leads into the palace of justice. In the process of gaining our rightful place we must not be guilty of wrongful deeds. Let us not seek to satisfy our thirst for freedom by drinking from the cup of bitterness and hatred.

We must forever conduct our struggle on the high plane of dignity and discipline. We must not allow our creative protest to degenerate into physical violence. Again and again we must rise to the majestic heights of meeting physical force with soul force. The marvelous new militancy which has engulfed the Negro community must not lead us to a distrust of all white people, for many of our white brothers, as evidenced by their presence here today, have come to realize that their destiny is tied up with our destiny. They have come to realize that their freedom is inextricably bound to our freedom. We cannot walk alone.”

And the great memorable finish that has been so forgotten these last 5 years:

I say to you today, my friends, so even though we face the difficulties of today and tomorrow, I still have a dream. It is a dream deeply rooted in the American dream.

I have a dream that one day this nation will rise up and live out the true meaning of its creed: “We hold these truths to be self-evident: that all men are created equal.”

I have a dream that my four little children will one day live in a nation where they will not be judged by the color of their skin but by the content of their character.

I have a dream today.

I have a dream that one day, down in Alabama, with its vicious racists, with its governor having his lips dripping with the words of interposition and nullification; one day right there in Alabama, little black boys and black girls will be able to join hands with little white boys and white girls as sisters and brothers.

I have a dream today.

This will be the day when all of God’s children will be able to sing with a new meaning, “My country, ’tis of thee, sweet land of liberty, of thee I sing. Land where my fathers died, land of the pilgrim’s pride, from every mountainside, let freedom ring.”

Let freedom ring from the snowcapped Rockies of Colorado!

Let freedom ring from the curvaceous slopes of California!

But not only that; let freedom ring from Stone Mountain of Georgia!

And when this happens, when we allow freedom to ring, when we let it ring from every village and every hamlet, from every state and every city, we will be able to speed up that day when all of God’s children, black men and white men, Jews and Gentiles, Protestants and Catholics, will be able to join hands and sing in the words of the old Negro spiritual, “Free at last! free at last! thank God Almighty, we are free at last!”

The Entire speech is here: This video is the complete speech. Be inspired and filled with hope:

But 5 years later Dr. King was on this earth no more. Those who followed turned from unity to division, from demanding God given freedom and Justice to a big time hustle

for themselves and a cheap stipend for the masses of black Americans. Lyndon Johnson delivered a stipend but the accusations and hustle never ends. South Carolina Congressman James Clyburn is an example, who, like me, was a young school teacher in 1963. Clyburn was in that crowd in Washington that day. The future Congressman heard—no experienced—those transcendent words. But he turned to a life of hustle for perks, like a government car, that come from going along with the likes of Nancy Pelosi and President Obama—transforming the abundance of freedom to the poverty of redistribution.

Decades ago the NAACP turned away from Dr. King’s dream and the hope of the martyred Medgar Evers and raced towards Marxist redistribution. The current NAACP President, Ben Jealous, is perfectly suited for the politics of racial division and strife. He can seem so reasonable as he accuses you and most Americans of racism. The 2013 NAACP convention coincided with the not guilty verdict of George Zimmerman. The gathering was a wall to wall, morning to night three day festival of division. There can be no doubt the tone was set by the two who launched this present division of America by race in February, 2009—President Obama and Attorney General Eric Holder.

Of course money and power can be achieved from race hustling with business as easily as government corruption. There are many successfully in the race business today but it is sufficient to feature the only two real icons:

Dr. Martin Luther King said, “So we have come to cash this check — a check that will give us upon demand the riches of freedom and the security of justice.” Like today’s NAACP and today’s Congressional Black Caucus, he saw the Negro with a government check. But, unlike all of them and their minions who stick their hands in your pockets, he saw that freedom of opportunity and justice is the promise of America.

He cautioned the blacks who saw promise they had waited so long for with this warning, “In the process of gaining our rightful place we must not be guilty of wrongful deeds. Let us not seek to satisfy our thirst for freedom by drinking from the cup of bitterness and hatred.”

Not the least of Dr. King’s dreams was “that my four little children will one day live in a nation where they will not be judged by the color of their skin but by the content of their character.” This child who bears his name is not interested in character but only skin color:

These and so many others have betrayed the dream of Dr. King. But America is blessed with so many of its black citizens, like Justice Clarence Thomas, who have moved past race. They are rising with all Patriots to save and restore the American Constitution, limited government, and the free market system. That story will be told on other days ahead.

Richard Johnson: a mature Christian who understands the sweep of history, the unique role of America and these times clearly and precisely.
View all posts by Richard Johnson →
This entry was posted in American Promise, Obama's America: Racism, Special Moments. Bookmark the permalink.