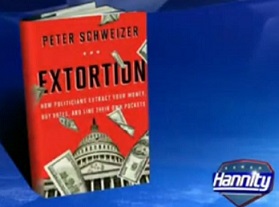 Hoover Institution Fellow Peter Schweizer has released his new book, Extortion: How Politicians Extract Your Money, Buy Votes and Line Their Own Pockets. The book does not make charges; it simply exposes facts. The racket is by-partisan. Some one half of the book exposes the rampant extortion in the Obama Administration. Schweizer’s facts show the Department of Justice under Eric Holder is the worst in U.S. history.

Appearing on Hannity Tuesday night, Schweizer said, “President Obama is a little bit like the squeegee man that walks up to your car and say, ‘I want to clean your windshield.’ He’s got a brick in one hand and a cloth in the other and you gotta pay them or the brick comes through your windshield. [Attorney General] Eric Holder is basically the squeegee guy holding the brick.”

“There are companies that are being told that they are subject to [DOJ] investigation for charges—criminal and civil. And then literally those companies are solicited for donations to the Obama campaign and now to the Obama political committees.” Here is the Hannity interview:

Richard Johnson: a mature Christian who understands the sweep of history, the unique role of America and these times clearly and precisely.
View all posts by Richard Johnson →
This entry was posted in Lawless Government, Obama. Bookmark the permalink.