We are going to use the term “jihad” regularly here as we face and address the “religious war” that has been declared against us—a war we must engage and win. Americans would need to go back in history to the War Between the States to find a task as daunting as the one we face today. So what does jihad mean? Muslim spokesmen and Progressive sympathizers, like President Obama, continually give many definitions of jihad in order to obfuscate. Here is the best working definition I have found:

The vast majority of the world’s Muslims are actively engaged either in jihad or in some form of support of jihad.

The universal Islamic goal is for the entire world to be subjected to Islam. This universal subjugation is what is referred to peace. This is the thought when we are told Islam is a religion of peace. 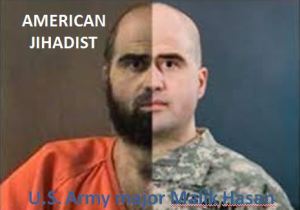 Muslims are conducting jihad against America (the abode of war) in courts, in schools, through religious (especially ecumenical) gatherings, in all national and local media, in all entertainment venues, throughout social media and more. And oh, yes—jihad is coming at us in every form of terrorist violence. Americans must quickly come to know and understand this. We are down for the fight and will help here at The Patriot’s Trumpet.

Richard Johnson: a mature Christian who understands the sweep of history, the unique role of America and these times clearly and precisely.
View all posts by Richard Johnson →
This entry was posted in America at war, Islamic war against America, Jinad/Shariah. Bookmark the permalink.