THE TYRANT, DETERMINED TO DESTROY NETANYAHU, SENDS FUNDS AND STRATIGESTS TO DEFEAT HIM FOR REELECTION

Caroline Glick picked up on one article the Israeli left-wing paper Ha’aretz didn’t bother translating into English that details Obama’s involvement in the upcoming Israeli elections. A summary of the article is provided by IMRA (Independent Media Review & Analysis):

Haaretz reporter Roi Arad revealed in an article in the Hebrew edition today [January 26] that the foreign funded organization, “One Voice”, is bankrolling the V-2015 campaign to defeat Binyamin Netanyahu’s national camp in the March 2015 Knesset Elections. 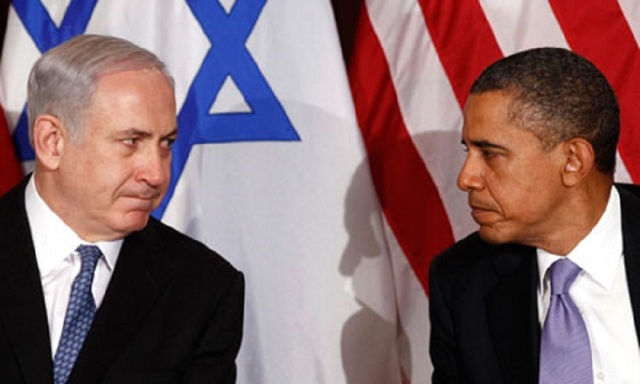 One indication of the generous financing is that it has now flown in a team of five American campaign experts (including Jeremy Bird, the Obama campaign’s national field director) who will run the campaign out of offices taking up the ground floor of a Tel Aviv office building.

V-2015 is careful not to support a specific party – rather “just not Bibi”. As such, the foreign funds pouring into the campaign are not subject to Israel’s campaign finance laws.

Obama won’t meet Benjamin Netanyahu – בנימין נתניהו in Washington when he addresses the Joint Houses of Congress in March because of Netanyahu’s visit’s proximity to the Israeli elections. And Obama, of course believes in protocol and propriety which is why he won’t get involved. No, he’s not getting involved at all. He’s just sending his 2012 field campaign manager to Israel to run a campaign to defeat Netanyahu. That’s all. No interference whatsoever.

The Israeli Left adores touting Netanyahu’s “interference” in American elections, specifically his expression of support for Mitt Romney in the 2012 campaign. When it comes to Israeli left-wing politics, there are simply things you just don’t do when you represent the center-right. It should come as no surprise then that Haaretz, known on this side of the globe for its freakish ability to generate anonymous White House sources that love talking about how much Obama hates Bibi (a shared talent among the Left) would conveniently forget to translate this little news item for their English-reading audience.

We can assume 18% of voters in American national elections are hard core leftists. That means 42,700,000 American voters made the greatest blunder in electoral history. It raises questions:

Richard Johnson: a mature Christian who understands the sweep of history, the unique role of America and these times clearly and precisely.
View all posts by Richard Johnson →
This entry was posted in Anti-Semitism, Foreign Policy Disaster, Lawless Government, Obama, Obama Age of Darkness, State of Obama's America. Bookmark the permalink.

1 Response to THE TYRANT, DETERMINED TO DESTROY NETANYAHU, SENDS FUNDS AND STRATIGESTS TO DEFEAT HIM FOR REELECTION