Several speakers (potential candidates) established powerful credentials. Keep in mind seven other potential top tier candidates were not at the Summit. We’ll make your look at seven of those at the Summit easy and publish them here. 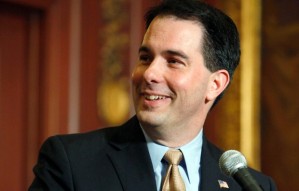 We begin today with Governor Walker. Readers of the Patriot’s Trumpet already know that Governor Walker is my early choice for President. The Freedom Summit gave Governor Walker a huge bump. The basic reason was the effectiveness and a acceptance as well as the substance. The second reason is that the successful proof of his ideas is being lived in Wisconsin. Perhaps first, as well as last, is that Governor Walker was judged the big winner by the whole range of conservative commentators from, ardent Romney (who was not there) supporter, Hugh Hewitt to radio talk show king Rush Limbaugh.

Governor Walker gave us a surprisingly intimate look into the experience for his family as well as himself with the viciousness of the Obama generated union thug shock troops sent into Wisconsin to intimidate and terrify. Here are a few memorable quotes:

Today I’m proud to tell you that, because of our reform, our boys are growing up in a State that is even better than the one we grew up in. Because we weren’t afraid to go big and to go bold for my sons and for their generation and for countless generations yet to be born they’re living in a state that’s on a better path. And people like the direction they’re heading. Maybe that’s why I’ve won the race for Governor three times in the last four years.

I think there is a powerful message to Republicans in Washington and around the Country. If you are not afraid to go big and go bold, you can actually get results! … And if you get the job done the voters will actually stand up with you.

Since I was elected Governor, we’ve cut taxes in Wisconsin, we reduced spending—we balanced the budget, we took the power away from the big government special interests and we put it firmly in the hands of the hard working taxpayers. That’s what we need more of in this great country. … If [his reforms] can work in a blue state like Wisconsin, they can work in any state in the country.

[Many people] don’t know about the common sense conservative agenda we’ve enacted in our State. Since I’ve governor we’ve passed prolife legislation and we’ve defunded Planned Parenthood. Since I’ve been governor we’ve pulled back on regulation of small businesses and family farms—I like to say we now enforce common sense instead of bureaucrat red tape. We’ve taken it beyond regulations. We’ve enacted legal reforms so that small businesses and farmer don’t have to deal with frivolous law suits. We’ve enacted legislation that allows for concealed carry and the castle doctrine so that law abiding citizens in our state can stand up and defend themselves and their families and their property. And we believe it’s important to protect the integrity of every vote cast so we require in our state, by law, a photo ID to vote.

Looking ahead as Republicans we need to make policies that promote and defend hard work in this country once again. We need to promote policies that open the door to opportunity for people to live their piece of the American dream.

Governor Walker closed with this promise: “I’m going to come back many more times in the future.”

Here is Governor Walker’s entire Freedom Summit speech which could prove to be historical:

Richard Johnson: a mature Christian who understands the sweep of history, the unique role of America and these times clearly and precisely.
View all posts by Richard Johnson →
This entry was posted in 2016 election. Bookmark the permalink.