THE LAMB OF GOD ENTERS JERUSALEM TO OBSERVE PASSOVER

Jesus’ followers believed He, like thousands of pilgrims who had come from all over the Roman world, went to Jerusalem to observe Passover. He would be there for the Passover meal Thursday. It was the reenactment of the original Passover nearly 15 centuries before. (Passover begins this year at sundown Friday, March 3 to end March 11 in Israel and March 10 for the Diaspora.) 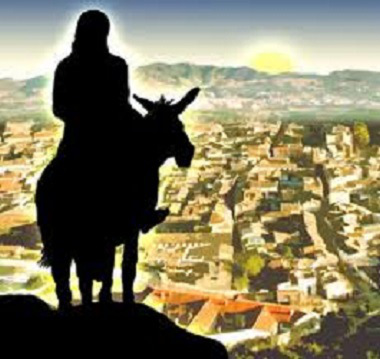 No one could have imagined how profoundly He would change the “blood of the lamb” within a week! His purpose was not apparent as He entered Jerusalem—except to Him. He knew His time was at hand. He also knew what was ahead just two generations hence for His people and His beloved Jerusalem. Read the account from St Luke 19:41-44 with me:

And when He had come near, He beheld the city and wept over it saying, “If thou had known, even thou, at least in this thy day, the things which must be for thy peace! But now they are hid from thine eyes. For the days shall come upon thee that thine enemies shall cast a trench about thee, and compass thee around, and keep thee in on every side. And they shall lay thee even with the ground and thy children within thee; and they shalt not leave in thee one stone upon another, because thou knewest not the time of thy visitation.”

Jesus wept for Jerusalem because He knew its pain, a pain that exists until this day with a Dome of the Rock on top one of the holiest sites in creation and rockets fired at God’s people almost daily. But we should weep because of the pain He bore for us. I heard on the radio that good people get to Heaven. I guess that’s right. I have just not heard of anyone good enough. But because of Him, because of His gift of salvation in His shed blood, I, a sinner, will be in Heaven washed white as snow. Centuries ago, the Negro slaves in America sang, “you can say He died for all.” That is right. I hope you too weep this week because you have accepted His gift of life and you can say, “He died for all.”

Tomorrow: The Lion of Judah

Richard Johnson: a mature Christian who understands the sweep of history, the unique role of America and these times clearly and precisely.
View all posts by Richard Johnson →
This entry was posted in Holy Week and Passover. Bookmark the permalink.