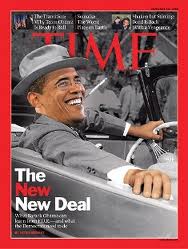 Remember, just two years ago, hope and change was going to be the real second coming of the New Deal and FDR. An obscure leftist periodical, TIME magazine, featured the new President Obama as FDR on the cover —one of more than 25 TIME Obama covers. Who could have imagined a year ago the story line would require a complete reversal of course.

In their eyes, FDR is the most successful and important American leader ever. There could be no better way to express their expectations and faith in Obama than a direct comparison to Roosevelt. But, a 180 degree reversal is clearly required and repent they did. (What a perfect example of repentance!) Obama, we now discover is just like Ronald Reagan. 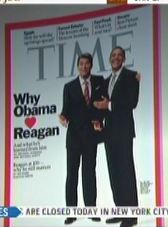 Now, this “new Obama” is being sold (Photoshopped) as evidence of Obama’s consummate skill as a leader. The real story, the real motive, and you’ll only get it here, is the template —the road on which to walk away from “the dunce” Obama—is in place. Remember, their spite and disdain for the simpleton Ronald Reagan was complete.

There will be no Obama daughter to reveal their father has Alzheimer’s, but they will not need that, their chorus will be ready to sing in unison and on key how the Gipper never understood his job. Obama? Photoshop is always available.