WHO CALLED OBAMA A CHICKEN-HAWK?

Like Racist, Hater and Extremist, Chicken-hawk Is a Smear Used by Leftists With No Ideas and No Winning Arguments.

For those on the traditional right, a little background; the term chicken-hawk was not created as a political smear. Like the term “tea-bagger,” it was appropriated from the “urban” culture.

Chicken-hawk: A Gay term for an older man that constantly chases after younger men typically in their 20’s.

The left used the term “chicken-hawk” to smear the members of Bush team as America responded vigorously against attacks from our Islamist enemies. President Bush and members of his team who had not actually served in combat themselves qualified for the smear.  President Bush, Vice President Cheney and many members of the Bush team were called “chicken-hawks” by hundreds of leftists.

Since Sunday, who called President Obama, who never served at all; who had no contact with members of our military, a chicken-hawk? 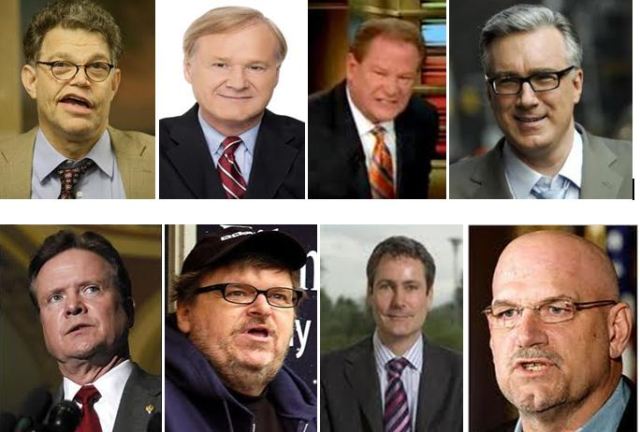 Well what do you know? None of them has raised and used the term “chicken-hawk” for President Obama; not when he sent tens of thousands of our armed forces to Afghanistan; not when he drug us stupidly into Libya; not when SEAL Team 6 made us proud Sunday. Not one time! You can google, “Obama is a chicken-hawk.” You’ll get zero, nada, nothing.

Principles? They have none. Character? I wouldn’t get into a foxhole with any of them. Not the ones “honored’ here with their pictures. None of the rest, not a single one!

Richard Johnson: a mature Christian who understands the sweep of history, the unique role of America and these times clearly and precisely.
View all posts by Richard Johnson →
This entry was posted in Obama, Uncategorized. Bookmark the permalink.