Fortunately, we have nothing to worry about because Islam is so “moderate.”

In Pakistan, according to the AP, a 26 year old “moderate” assassinated a Pakistani governor. 170 “moderate” lawyers showered him with rose petals as he entered court. Across the country “moderate” Muslims (including “moderate” scholars) cheered Mumtaz Qadri, the assassin.

The Associated Press fretted, “Pakistan’s founding father, Muhammad Ali Jinnah, helped establish the country in 1947 as a moderate Islamic state welcoming all minority groups and religions. But that foundation has slowly been eroded over the years . . .” My only direct experience with the “moderate welcoming” Pakistan was in the 1980’s I had a business deal coming together to ship high producing dairy cattle to Pakistan. I called Northwest Airlines and asked for a price on cattle fitted cargo charters to Pakistan. The immediate reply was, “Your first cost will be three U.S. fighter escorts.” (Yes, the project was dead. Those “moderate” Pakistani Muslims still have low production cows.)

In Egypt, those freedom loving “moderate” Muslims “. . . marched from the Salafi, Cairo, May 6, 2011. The March began from the Al-Nour mosque in Abbasiyah, (to) the US Embassy in Cairo to denounce the killing of Osama bin Laden . . . (H/T Atlas) 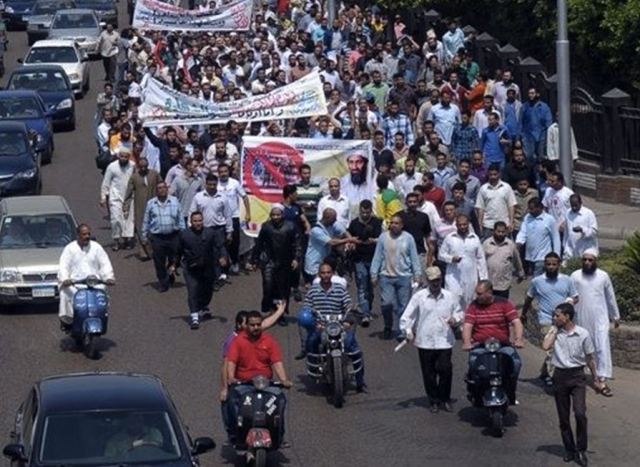 Also May 6, 2011, the reliably characterized “moderate” Muslim Brotherhood called for an end to peace with Israel. “We should now raise our voice to ask for: an end to normalisation [with Israel] which has given our enemy stability; an end to [Egyptian] efforts to secure from infiltrators the borders of the Zionists; the abolition of all [joint] economic interests such as the Qualified Industrial Zones agreement and the export of Egyptian gas to Israel,” said Mohamed Badie, the Brotherhood’s leader.”

Those “moderate Muslims In London “While many protests took place across the Muslim world, the most extraordinary took place in London, where hundreds of supporters gathered at the U.S. embassy to stage a mock ‘funeral service’ for the slain terror leader.

The violence erupted just days after the city – often dubbed London-istan because of its reputation for Islamic extremism  – was branded a major recruiting ground for Al Qaeda.”

PARIS/LONDON: Europe’s Muslims expressed anger or disbelief on Friday over the killing of Osama Bin Laden but praise for the late Al-Qaeda chief was in short supply.

Ahead of Friday prayers at a mosque in northern Paris, many worshippers greeted questions about his death with raised eyebrows, describing it as a vast public relations operation to ensure the re-election of US President Barack Obama.

“This whole story is a myth,” one middle-aged Muslim man who declined to be named said, pausing as he walked into the Al-Fath mosque.

“They invented it to distract Americans from real problems over there, like the economy and gas prices.”

A man who gave his name as Mohammed demanded to see photographic evidence. Asked how he might react to graphic photos of a dead Bin Laden, shot in the head in the 40-minute raid, he said: “Well, I’ll know when I see them.”

As worshippers laid out prayer mats and shared banter, another man, in his twenties, described accounts of the raid by US forces that killed Bin Laden last Sunday as “a classic Western film — call it ‘Revenge for September 11’.”

“Americans are creating problems all over the world,” he added. “Why can’t they just leave Muslims alone?“

Few had praise for the mastermind of the Sept. 11, 2001, attacks, which killed more than 3,000 people. But many disapproved of how his remains were handled. US officials said they performed religious rites before burying his body at sea. “It’s true that he killed hundreds of people, that he was behind massacres…but the way they got rid of the body, throwing it into the sea, I didn’t like that one bit,” said Abdellah, 30, a consultant at BNP Paribas bank in Paris.

Moussa Niambele, imam of the al Fath mosque, avoided the question, saying: “It is not our position to comment on this.”

In London, about 100 members of the radical group, Muslims Against Crusades (MAC), staged a protest and “funeral prayers” in honor of Osama Bin Laden outside the US Embassy.

The group shouted slogans such as “Freedom burn in hell” and “USA will pay” while waving banners stating “Jihad against crusaders” and “Sharia law for UK.”

Anjem Choudary, one of the leading MAC figures, said they were protesting against “injustices” committed by the United States: “The latest injustice is the assassination of an old man in his home in front of his family, Sheikh Osama Bin Laden.”

“We are here today as well to pray for him and also to say that we demand the body back of Sheikh Osama because we don’t believe what they say in their speech. Because Obama is a liar. He’s an assassinator, like his predecessor,” he added.

He warned of future revenge attacks by militants.

“I believe Al-Qaeda will take revenge. The next operation I believe will be called ‘Operation Bin Laden’ and will match the magnitude and character of the past.

“The philosophy of Al-Qaeda is to take the war to the enemy on their own homeland, so it will be in the West.”

The MAC protesters were confronted by about 50 members of the right-wing  organization, the English Defense League (EDL), with police having to keep the two chanting groups apart, amid minor scuffles.

Officers confiscated an effigy of Bin Laden being waved by the EDL supporters but police said they had no immediate reports of any arrests at the ongoing demonstration.

In Germany, Muslim Anis Abdullah said after Friday prayers at the Omar Ibn Al-Khattab Mosque in Berlin: “We don’t want anything to do with such people — what they do is totally wrong. Islam forbids the way of Bin Laden.”

But in Frankfurt, a German radical was planning to hold a memorial for Bin Laden on Saturday after a court on Friday overturned a ban on the rally by local city officials. The court warned him, however, not to mention Bin Laden’s name.

A judge in Hamburg filed a criminal complaint against Chancellor Angela Merkel on Friday for “endorsing a criminal act” because at a news conference in Berlin on Tuesday she has said: “I’m glad that killing Bin Laden was successful.”

The labor court judge, Heinz Uthmann, told Reuters that he believed Merkel’s comments violate German law. He said, however, he expected his complaint to end up in the rubbish bin.

Fortunately, we have nothing to worry about because Islam is so “moderate.”

Richard Johnson: a mature Christian who understands the sweep of history, the unique role of America and these times clearly and precisely.
View all posts by Richard Johnson →
This entry was posted in Jinad/Shariah, Liberty, Obama. Bookmark the permalink.