“OCCUPY” CRIME, VIOLENCE AND FILTH: WHO COULD HAVE KNOWN?

The “peaceful” “Occupy Wall Street” celebrated their first two months of —call it “life”— Thursday with rampant rage and violence. Who could have known? 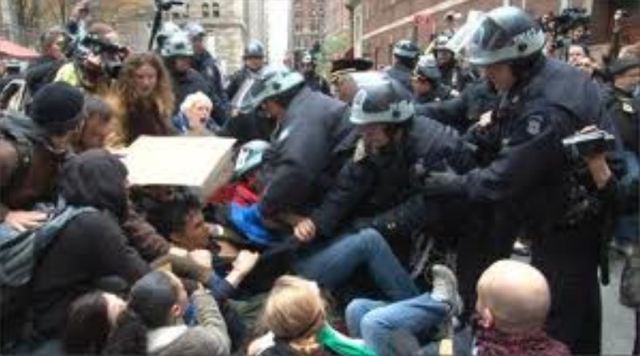 The thug president of the thug union, SEIU, Mary Kay Henry, was arrested for calculated lawlessness. Who could have known?

Wednesday, just the day before, thug SEIU president, Mary Kay Henry, endorsed President Obama for reelection, claiming him as an authentic thug. Who could have known? Who could have guessed?

Oh, I almost overlooked George Fresham, thug president of the thug nurses union, 1199/S.E.I.U., United Healthcare Workers East. Who could have known your nurse is a thug?

Some 400 thugs were arrested across the country, October 17, the designated “Day of Violence.” Who could have known?

She sailed away on a lovely summer day on the back of a crocodile, “Now you see,” said she, “he’s as tame as he could be and I’ll ride him down the Nile,” The croc winked his eye as she waved them all goodbye wearing a happy smile, At the end of the ride, the lady was inside and the smile was on the crocodile.

Other thug vandals desecrated a church in North Carolina. Their filthy action included defecating on the alter and partially burning a cross.

Meanwhile, Obama’s thug pastor, Jim Wallis, is offering the thug “occupiers” sanctuary in his church. Wallis encourages other pastors to do the same. Who could have guessed?

Richard Johnson: a mature Christian who understands the sweep of history, the unique role of America and these times clearly and precisely.
View all posts by Richard Johnson →
This entry was posted in Obama's America: Racism, OWS, The Cost of Democrats. Bookmark the permalink.