UPDATE: WHO CALLED OBAMA A CHICKEN-HAWK—OH OH DID RON PAUL “OUT” HIMSELF?

Posted on January 5, 2012 by Richard Johnson

“Out himself,” you say, “please explain.” Very well, the full explanation directly follows this re-post of my first “Chicken-Hawk” done eight months ago, as Obama was taking personal credit for killing bin Laden, I searched for the liberal outrage and posted these findings including a bit of background:

Like Racist, Hater and Extremist, Chicken-hawk Is a Smear Used by Leftists With No Ideas and No Winning Arguments.

For those on the traditional right, a little background; the term chicken-hawk was not created as a political smear. Like the term “tea-bagger,” it was appropriated from the “urban” culture.

Chicken-hawk: A Gay term for an older man that constantly chases after younger men typically in their 20′s.

Since Sunday, who called President Obama, who never served at all; who had no contact with members of our military, a chicken-hawk? 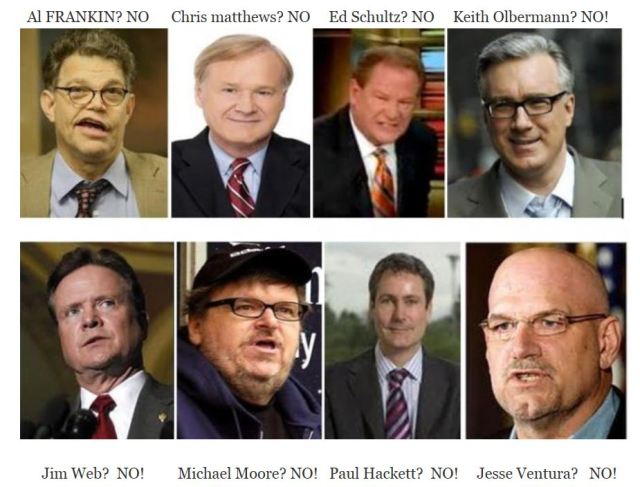 Well what do you know? None of them has raised and used the term “chicken-hawk” for President Obama; not when he sent tens of thousands of our armed forces to Afghanistan; not when he drug us stupidly into Libya; not when SEAL Team 6 made us proud Sunday. Not one time! You can google, “Obama is a chicken-hawk.” You’ll get zero, nada, nothing.

Principles? They have none. Character? I wouldn’t get into a foxhole with any of them. Not the ones “honored’ here with their pictures. None of the rest, not a single one!

Now, January, 2012, comes Ron Paul who, like Jesse Ventura, is a self styled Libertarian who turns out to be to the left of Obama.

But who knew he was so hip? Married for many years; a son in the United States Senate; delivered thousands of babies; but he seems totally at ease in the Urban Dictionary. What did he say to make us wonder? Here is the story from the Washington Times:

Rep. Ron Paul of Texas called one of his Republican presidential-primary rivals a “chickenhawk” Wednesday and taunted his lack of military service.

After host Soledad O’Brien noted that Mr. Gingrich said he would not support Mr. Paul in November should he be the Republican nominee, Mr. Paul laughed and said he opposes “unconstitutional” wars and putting young people in danger, and then called Mr. Gingrich a personal coward.

“You know when Newt Gingrich was called to service in the 1960s during the Vietnam era, guess what he thought about danger? He chickened out on that and he got a deferment. He didn’t even go. So right now he’s sending these young kids over there to endure the danger,” he said.

“Some people call that a chickenhawk and I think he falls into that category,” Mr. Paul continued.

This is not the first time Mr. Paul has used Mr. Gingrich’s 1960s life to criticize his foreign policy. On Dec. 15, he also called out the former speaker, though he didn’t use personal epithets such as “chicken.”

“He supports all the wars in the Middle East a thousand times more than I would. But you know in the 1960s when I was drafted in the military, he got several deferments. He chose not to go. Now he’ll send our kids to war,” Mr. Paul said in a Fox News interview then.

Mr. Paul, after graduating from medical school, served as a surgeon for the Air Force and Air National Guard in the 1960s.

Mr. Gingrich received several student deferments in the 1960s — earning a bachelor’s degree from Emory University in 1965 and a master’s from Tulane in 1968. He also was reportedly judged unsuited for the military for other reasons — flat feet, near-sightedness and being married with children.

This is important for two reasons. One is Conservatives do not use smear terms such as Racist, Hater, Extremist and Chicken-hawk. The other is Google cannot find one time where Dr. Paul, who has been very critical of Obama for the American military successes for which Obama grandly has took credit, called Obama a Chicken-hawk. Not one time. Dr. Paul turns out to be a leftist worthy of the company pictured above.

Richard Johnson: a mature Christian who understands the sweep of history, the unique role of America and these times clearly and precisely.
View all posts by Richard Johnson →
This entry was posted in 2012, Remaking the Republicans. Bookmark the permalink.