25 days before the Presidential election, it is fair to sum up the position of the White House as, “It is not my fault.” It would be misleading characterize it as, “Not our fault.” As the Benghazi scandal explodes, it is clear the White House is throwing other players—Mrs. Clinton, for example—under the bus. It is very instructive to take a look back at how we got to, “It’s not my fault.”

It did not start out that way. It started out with an “everyman” promise of “hope and change.” President Obama started out taking responsibility for, some would say, quite a bit:

“This is the moment when the rise of the oceans begins to slow and our planet begins to heal.”

People responded to the promise expressing their heartfelt hope in every conceivable way—this Internet Site banner, for example.

President Obama came into office facing an enormous economic crisis. The mortgage meltdown was upon us. This was caused by Democrats making the ownership of a house a virtual entitlement. It began with Jimmy Carter and was expanded a decade and a half later by President Clinton. After the Clinton expansion, it became impossible for lenders to make sound home loans. To turn an unsound loan down would bring scrutiny from the Federal government with charges such as racism. By the mid-90’s, private equity in homes was becoming a thing of the past. The government made it possible to sell these originated loans to the government created Freddie Mac and Fannie Mae. This led to the Wall Street real estate derivative scheme and the 2008 economic crisis as false values crashed.

Upon his inauguration, President Obama made it clear that he had no responsibility for any of the past and others (especially intimating President Bush) had acted recklessly and irresponsibly. The new President was not simply talking—he was acting on responsibility! Only five weeks after taking office, he published this document:

Do you think the responsible way to start his responsibility era is to blame Bush? He did just that and more. This’ll give you a flavor:

We start 2009 in the midst of a crisis unlike any we have seen in our lifetimes. Our economy is in a deep recession that threatens to be deeper and longer than any since the Great Depression. More than three and a half million jobs were lost over the past 13 months, more jobs than at any time since World War II. In addition, another 8.8 million Americans who want and need full-time work have had to settle for part-time jobs. Manufacturing employment has hit a 60-year low. Our capital markets are virtually frozen, making it difficult for businesses to grow and for families to borrow money to afford a home, car, or college education for their kids. Many families cannot pay their bills or their mortgage payments. Trillions of dollars of wealth have been wiped out, leaving many workers with little or nothing as they approach retirement. And millions of Americans are unsure about the future—if their job will be there tomorrow, if their children will be able to go to college, and if their grandchildren will be able to realize the full promise of America.

This crisis is neither the result of a normal turn of the business cycle nor an accident of history. We arrived at this point as a result of an era of profound irresponsibility that engulfed both private and public institutions from some of our largest companies’ executive suites to the seats of power in Washington, D.C. For decades, too many on Wall Street threw caution to the wind, chased profits with blind optimism and little regard for serious risks—and with even less regard for the public good. Lenders made loans without concern for whether borrowers could repay them. Inadequately informed of the risks and overwhelmed by fine print, many borrowers took on debt they could not really afford. And those in authority turned a blind eye to this risk-taking; they forgot that markets work best when there is transparency and accountability and when the rules of the road are both fair and vigorously enforced. For years, a lack of transparency created a situation in which serious economic dangers were visible to all too few.

This irresponsibility precipitated the interlocking housing and financial crises that triggered this recession. But the roots of the problems we face run deeper. Government has failed to fully confront the deep, systemic problems that year after year have only become a larger and larger drag on our economy. From the rising costs of health care to the state of our schools, from the need to revolutionize how we power our economy to our crumbling infrastructure, policymakers in Washington have chosen temporary fixes over lasting solutions.

The time has come to usher in a new era—a new era of responsibility in which we act not only to save and create new jobs, but also to lay a new foundation of growth upon which we can renew the promise of America.

This Budget is a first step in that journey. It lays out for the American people the extent of the crisis we inherited, the steps we will take to jumpstart our economy to create new jobs, and our plans to transform our economy for the 21st Century to give our children and grandchildren the fruits of many years of economic growth.

“To usher in a new era—a new era of responsibility”

The President finished his budget declaration:

Finally, while we have inherited record budget deficits and needed to pass a massive recovery and reinvestment plan to try to jump-start our economy out of recession, we cannot lose sight of the long-run challenges that our country faces and that threaten our economic health—specifically, the trillions of dollars of debt that we inherited, the rising costs of health care, and the growing obligations of Social Security. Therefore, while our Budget will run deficits, we must begin the process of making the tough choices necessary to restore fiscal discipline, cut the deficit in half by the end of my first term in office, and put our Nation on sound fiscal footing.

Some may look at what faces our Nation and believe that America’s greatest days are behind it. They are wrong.

Our problems are rooted in past mistakes, not our capacity for future greatness. We should never forget that our workers are more innovative and industrious than any on earth. Our universities are still the envy of the world. We are still home to the most brilliant minds, the most creative entrepreneurs, and the most advanced technology and innovation that history has ever known. And we are still the Nation that has overcome great fears and improbable odds. It will take time, but we can bring change to America. We can rebuild that lost trust and confidence. We can restore opportunity and prosperity. And we can bring about a new sense of responsibility among Americans from every walk of life and from every corner of the country.

Do we hear this four years later?

No, as a matter of fact, this was his first, last and only budget. Four years later he is still blaming Bush. But now it is Governor Romney, Congressman Ryan, The Republicans in Congress, Wall Street, Greedy oil companies, etc. Now, incredibly, after four years of deficits accumulating $6 trillion in new debt and with the scandals and the cover-ups bursting from darkness, it is also The State department’s fault. It is the Intelligence communities fault. Obama will throw anyone under the bus.

This trailer for the new Dave Bosse/Steve Bannon documentary, “The Hope and the Change” reveals the size of our crisis of leadership.

Leaders take responsibility and losers point fingers and place blame. We have had many leaders as President beginning with Washington right on through G.W. Bush. Harry Truman serves as well as any as an icon for what we need. 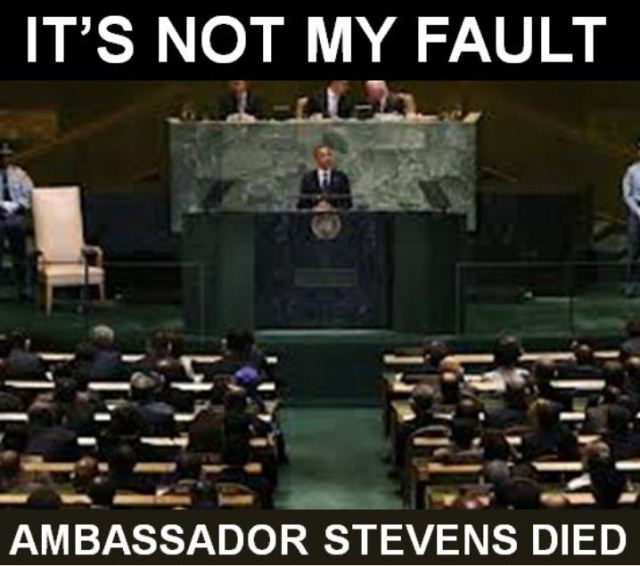 We can learn from Chicago Mayor (and former Obama White House Chief of Staff) Rahm Emanuel, “Never let a crisis go to waste.” Please join millions of Americans (We the People) as we send Mitt Romney, Paul Ryan and thousands of responsible citizens to take responsibility in Washington and state capitols across the nation to restore America’s purpose and her promise.

(Pray for the next 25 days; pray for America then show your character with your vote November 6th, 2012.)

Richard Johnson: a mature Christian who understands the sweep of history, the unique role of America and these times clearly and precisely.
View all posts by Richard Johnson →
This entry was posted in 2012, A Criminal Enterprise, American leadership, Character, Lawless Government, Obama. Bookmark the permalink.