IS IT OVER THE BRINK OR DO WE TURN BACK TO RECAPTURE THE PROMISE OF AMERICA? —WE KNOW IN 19 DAYS

Posted on October 19, 2012 by Richard Johnson
(A note of personal privilege: medical requirements have kept me away these past four days.)

I’m predicting this will become an avalanche vote for a new President, Governor Romney. Of the media commentators, only Dick Morris sees it my way but, I believe Governor Romney will win big capturing 36 states and 361 electoral votes. Here’s my customized electoral map projection as of today: 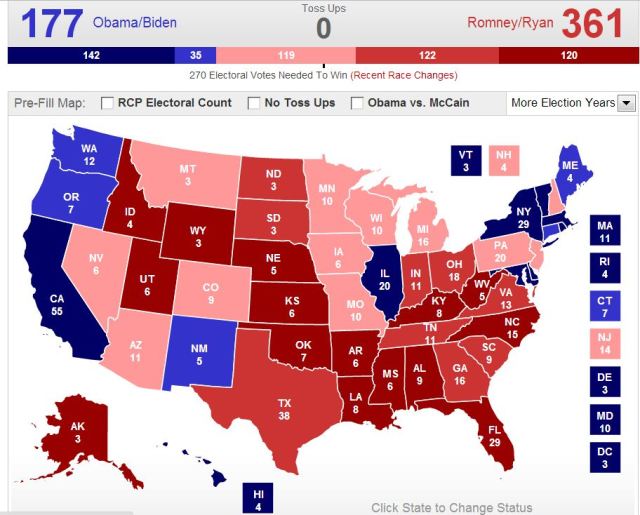 President Obama has an indefensible record to defend and the scandals of his Administration falling down upon him. The Occupy Wall Street and War On Women campaign themes have not worked and neither has the claim of dispatching al Qaeda with the killing of bin Laden. American voters will learn in the next two weeks that al Qaeda is stronger now than ever and the Arab Spring ought to be called Spring Fever (new by Andrew C, McCarthy). One more thing … Romney! This dude is really good. Turn up the sound. Go ahead and enjoy.

Richard Johnson: a mature Christian who understands the sweep of history, the unique role of America and these times clearly and precisely.
View all posts by Richard Johnson →
This entry was posted in 2012, Jinad/Shariah, Lawless Government, Obama, OWS, Reclaiming and Restoring America, World Events. Bookmark the permalink.