REFLECTIONS ON THE NEWTOWN TRAGEDY—40 YEARS OF DEATHS NOT NOTICED

On January 22, 1973, the United States Supreme Court handed down the Roe v Wade decision giving medical doctors the Constitutional right through “the penumbras of the Bill of Rights” to use tools of life as instruments of death for the littlest ones among us.

This past Wednesday, January 16, President Obama, in a masterfully staged setting, laid out his actions to (I believe) destroy the second amendment. This, if successful, will eliminate whatever power the people still have. The President’s powerful rationale for taking down the second amendment after the tragedy at Newtown, Connecticut was simple—the safety of “our” children. Dare I say the littlest ones?

The President smoothly declared in his opening remarks, “… [W]hat we should be thinking about is our responsibility to care for [our kids], and shield them from harm, and give them the tools they need to grow up and do everything that they’re capable of doing —not just to pursue their own dreams, but to help build this country.  This is our first task as a society, keeping our children safe.  This is how we will be judged.  And their voices should compel us to change.”

One can safely assume the President meant the life of each little one. But, in the past 40 years, the lives more than 50 million—50,000,000—of the littlest Americans were legally taken by “professionals” whose oath is, “First do no harm.” The term for this legal killing of our smallest and most defenseless is “abortion.” The Democrat Party signed on, let us say, “lock, stock and barrel.” Within 10 years, the party the President leads had become the PARTY OF DEATH. As an Illinois State Senator, Barack Obama seemed to be vying to be the chief proponent of death for little children—not shielding them from harm.

Americans are using guns as instruments of death; thousands every year; more than 500 a year in President Obama’s home town. Those tragic deaths are already crimes that should and must be vigorously prosecuted and punished at the local and state level. But abortion kills more than 3 million of our littlest ones each year. The abortionist besmirches the name of what should be among the most esteemed professions and turns tools of utility for cleanliness and life into deadly instruments of death.

According to Prochoice.com, “Abortion is performed in many ways that can severely damage ‘the mother’. It is also important for you to know that those who perform abortions receive special protection from liability, if the mother is injured. Essentially there are less legal safeguards to protect her health and even her life.” The description of the abortions methods below was developed from information taken from this Site.

Suction Abortion, also called vacuum aspiration, is the most common [62%] abortion technique in use today. In this procedure a suction tube is inserted through the dilated cervix into the womb. A powerful vacuum tears the placenta from the uterus and dismembers the body of the developing child, sucking the pieces into an attached jar. There is a risk that the uterus can be punctured during the procedure. Also, the abortionist must take care that all the body parts are removed from the womb, as infection and hemorrhage can occur if fetal or placental tissue is left in the uterus.

A Dilation and Curettage abortion is usually performed between seven and twelve weeks of pregnancy [26%]. The doctor inserts a curette, a loop-shaped steel knife, into the womb through the dilated cervix. As the curette scrapes the wall of the uterus, the baby is cut into pieces. Bleeding can be considerable. As with a suction abortion, there is a risk of infection or hemorrhage, so the abortionist must reassemble the body parts to make sure the uterus is empty. 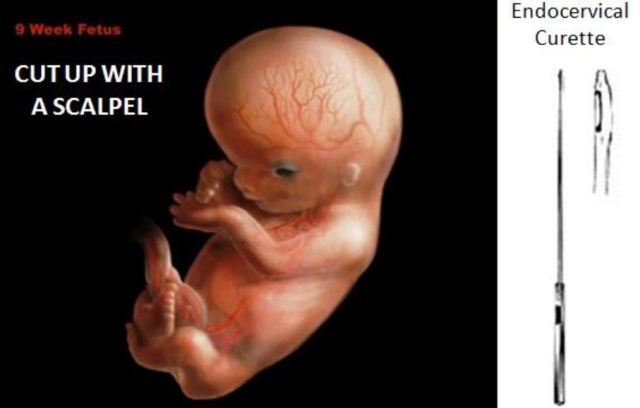 Dilation and Evacuation method is similar to a D&C, except that forceps must be used to grasp the baby’s body because of the child’s advanced development [6.6%]. The baby is dismembered as the abortionist twists and tears the parts of the body and slices the placenta away from the uterus. Bleeding is profuse. Although relatively safe for the mother, the procedure is devastating to the hospital staff and many doctors refuse to do advanced D&E abortions. 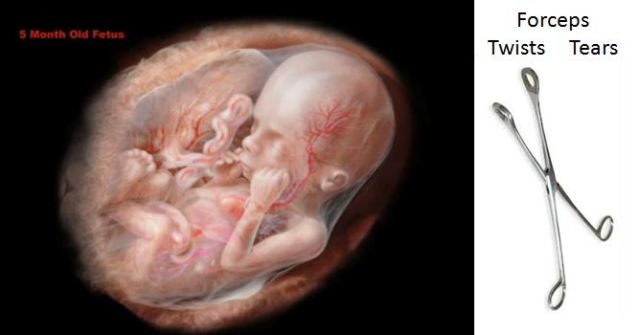 Saline Injection: is usually used after sixteen weeks [3.8%]. The doctor inserts a long needle through the mother’s abdomen and injects a saline solution into the sac of amniotic fluid surrounding the baby. The baby is poisoned by swallowing the salt and his skin is completely burned away. After the child dies, the mother goes into labor and expels the dead baby. Saline injections have been outlawed in some countries because of the risks to the mother, which can include lung and kidney damage if the salt finds its way into her bloodstream. In spite of the horrible burning effect, some babies have survived “salting out” and been born alive. 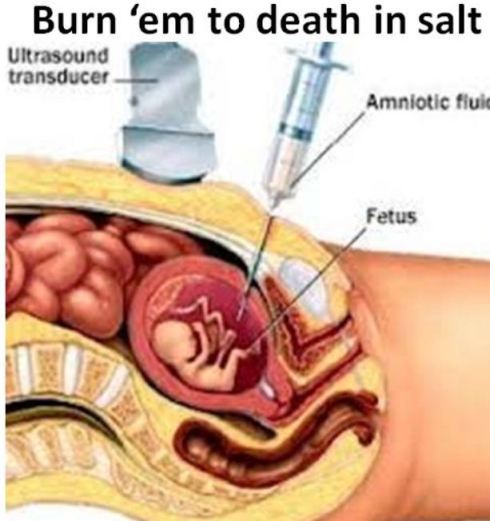 Hysterotomy: Similar to the Cesarean section, the hysterotomy [1.5%] abortion is a surgical procedure whereby the baby is removed from the mother’s womb and allowed to die by neglect or killed by a direct act. This method offers the highest risk to the mother and produces the most number of live births. Hysterotomy is used only for late term pregnancies, and is sometimes used if the salt poisoning abortion has failed.

Mr. President, join a majority of Americans in our responsibility to care for the littlest of our kids, and shield them from death. Then we can give them the tools they need to grow up and do everything that they’re capable of doing, to freely pursue their own dreams. Their freedom—and ours—will naturally “continue to build this country.” And, Mr. President, ending or continuing this evil scourge is how we will be judged. Listen, Mr. President, to the voices of 50 million from heaven. Surely they will compel you and America to change.

Update: Oh, here’s a tip Mr. President, this presentation of the science of life, featuring that little one above, should help you convince those foot-dragging Republicans:

Richard Johnson: a mature Christian who understands the sweep of history, the unique role of America and these times clearly and precisely.
View all posts by Richard Johnson →
This entry was posted in 2013, Life, Obama, This Present Darkness. Bookmark the permalink.