I’m trying to understand. It was reported Saturday that America closed 22 Embassies and Consulates in several Middle East countries. Why? That is the part that needs more verification. It apparently wasn’t done because of a “hateful video” that gave peaceful Muslims no choice but to riot and burn and bomb. No, it is said it is because of real threats from al Qaeda and al Qaeda linked terrorist (read Jihadist) groups.

Now we all know that President Obama “got Osama bin Laden” in May, 2011 cutting of the head of al Qaeda and President Obama, with Drone strikes in Yemen that September, destroyed al Qaeda’s heart (Anwar al–Awlaki) and body. This would surely allow the Arab Spring to flourish in Tunisia and Egypt and spread bringing peace throughout the Arab world. We were told that the U.S. Mission in Benghazi September 11, 2012 was an angry reaction to that “hateful video.” Since al Qaeda was destroyed by President Obama, the September 11, 2013 Benghazi attack on American facilities could not be terrorists, we were told.

Vice President Biden had just declared that at the Democrat National Convention the week before Benghazi:

Oh, Oh. Perhaps we didn’t have the facts. Perhaps the Shariah enforcing members of the Organization for Islamic Cooperation in the Middle East are not building democratic societies after all. Could it be they foster (al Qaeda connected) groups that are out to destroy us. Let me check.

Quick! You better read this (they are closed):

The United States is preparing to close 22 of its embassies and consulates in a number of Arab countries on Sunday due to the “significant” threat of a possible terrorist attack, discovered thanks to the interception of communications among leaders of the terrorist organization al-Qaeda. 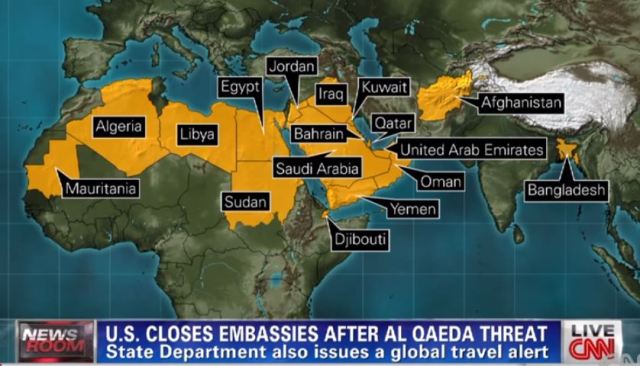 “There is a significant threat stream and we’re reacting to it,” the Joint Chiefs of Staff chairman, Gen. Martin Dempsey, said in an interview with ABC television that will air this Sunday, though some extracts from it have already been broadcast.

Meanwhile the State Department issued a global travel alert to U.S. citizens on Friday warning of “the continued potential for terrorist attacks, particularly in the Middle East and North Africa, and possibly occurring in or emanating from the Arabian Peninsula.”

“Current information suggests that al-Qaeda and affiliated organizations continue to plan terrorist attacks both in the region and beyond, and that they may focus efforts to conduct attacks in the period between now and the end of August,” when the travel alert would expire, the State Department said.

According to officials cited by the CNN network, U.S. intelligence has information that al-Qaeda on the Arabian Peninsula, or AQAP, with headquarters in Yemen, “is in the final stages of planning an attack against U.S. and Western targets.”

The same intelligence agency has been monitoring “a growing threat” against U.S. and western targets by the AQAP for several weeks.

In a video released this week on the Internet, al-Qaeda leader Ayman al-Zawahiri again called for “every Muslim everywhere to do all that is possible to stop the crimes of the United States and its allies in Palestine, Iraq, Afghanistan, Mali and elsewhere.”

He also slammed Obama for using drones in the U.S. anti-terrorist offensive in Afghanistan, Pakistan and Yemen.

Let me be sure I got that. The threat is from al Qaeda in Yemen and other al Qaeda connected groups in the region. The CNN map identifies 17 countries where there is a “significant threat stream” that al Qaeda is “a growing threat” against U.S. targets. Potential American travelers were warned about, “the continued potential for terrorist attacks, particularly in the Middle East and North Africa, and possibly occurring in or emanating from the Arabian Peninsula.”

Well what do you know? al Qaeda seems stronger than ever and potential terrorists attack will continue particularly [but not limited to] the Middle East and Northern Africa. Further, “al-Qaeda leader Ayman al-Zawahiri again called for ‘every Muslim everywhere to do all that is possible to stop the crimes of the United States and its allies.’”

It seems clear we were mislead by Joe (that “three letter word, Jobs”) Biden. The only thing President Obama seems to have accomplished was get Americans killed in Afghanistan and Benghazi.

But President Obama went golfing Saturday at an Andrews Air Force Base course.

On the other hand the threat alert will almost certainly motivate TSA to check you more closely before you can proceed to your flight.

Richard Johnson: a mature Christian who understands the sweep of history, the unique role of America and these times clearly and precisely.
View all posts by Richard Johnson →
This entry was posted in America the pitiful, Islamic war against America, State of Obama's America. Bookmark the permalink.