Posted on September 20, 2013 by Richard Johnson 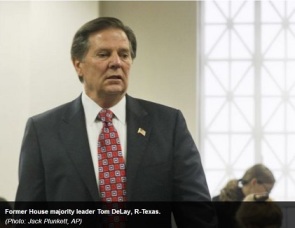 In a thorough 22 page decision, the Texas Court of Appeals, Third District at Austin, found Republican and Christian, Tom Delay, innocent after 17 years of persecution from the Hillary Clinton/George Soros radical left.  “Because we conclude that the evidence was legally insufficient to support DeLay’s convictions, we reverse the judgments of the trial court and render judgments of acquittal,” the court wrote. The Judge writing the majority opinion stated:

Delay explained his ordeal and how he thrived through it all in a revealing Thursday evening interview on Hannity. Here is a sample:

“It started back in 1996 when the Democrats stated publicly they were going to get me and that’s when the ethics charges started, racketeering suites, and finally an indictment for a law that doesn’t exist in Texas.

“The Democrats found a rogue DA [Ronnie Earle] who shopped it to 6 Grand Juries and swore in the sixth on the last day of the statue of limitations. 30 minutes after they were sworn in, they brought an indictment. Then they appointed a judge who was defeated in his own primary—what they called a ‘visiting judge’ who ‘slow walked’—it took it five years to get to trial. He ‘slow walked’ it because he knew five years under this cloud was a punishment unto itself. He knew the longer it took the easier it was to get me out of office.

“Criminalizing political differences is what the left does. If they can’t beat you politically then they come after you and put you in a grave and dance on your grave. That’s what they do.

“I didn’t have a burden on my shoulders. I gave my burden to the Lord and He carried it and I didn’t have to. Walking with Him every day, you can get through it. I don’t want to go through it again—but I praised Him every day. It made me a better person and gave me the piece and strength I needed to go forward.

“The abuse of our justice system for political gain is just outrageous and should not stand.”

Here is the Hannity interview:

Leftists are likely not done. The headline Thursday in the leftwing National Journal was Tom DeLay Is Still Guilty.

Richard Johnson: a mature Christian who understands the sweep of history, the unique role of America and these times clearly and precisely.
View all posts by Richard Johnson →
This entry was posted in A Criminal Enterprise, The Cost of Democrats, This Present Darkness. Bookmark the permalink.