THE FIRST AMERICAN PRESIDENT TO CHOSE TYRANNY OVER FREEDOM

Former Speaker Newt Gingrich may be America’s only elder statesman. In a letter released yesterday, Speaker Gingrich brought clarity and urgency to the existential issue of our time:

It’s simply extraordinary to have an administration that “questions the judgment” of Charlie Hebdo but calls Saudi tyrants “important partners in the fight against terrorism.” And to have a president who personally attends the funeral of an Islamist monarch but sends no senior officials to the Unity March in Paris or to the funeral of Margaret Thatcher (an authentic hero in the fight against totalitarianism).

You and I must actively deal with restoring America from the damage President Obama and those he empowers are wreaking on America. Speaker Gingrich’s letter is so very critically important, I have reprinted it here. Please set aside time to give it careful study and thought. It will help you in whatever role you find yourself in this battle for Liberty! Here’s the letter:

In deciding to skip the Unity March in Paris for a football game but cut short his trip to India to go to Saudi Arabia, President Obama chose tyranny over freedom.

His comments about the Saudi regime in advance of his trip confirmed the President’s priorities. As the Associated Press reports:

“Sometimes we need to balance our need to speak to them about human rights issues with immediate concerns we have in terms of counterterrorism or dealing with regional stability,” Obama said in a CNN interview aired while the president flew from New Delhi to Riyadh.

Although Obama will meet formally with the new king, Salman bin Abdul-Aziz Al Saud, he suggested he would not be raising U.S. concerns about Saudi Arabia’s flogging of blogger Raif Badawi, who was convicted of insulting Islam and sentenced to 10 years in prison and 1,000 lashes.

His first flogging took place in early January in front of dozens of people in the Red Sea city of Jiddah, though a second round has been postponed after a doctor said his wounds from the first lashes had not yet healed.

You have to read these paragraphs several times to understand how committed the Obama Administration is to apologies and appeasement of Islamist tyranny.

The man sentenced to 1,000 lashes wrote a blog calling for a more open Saudi Arabia.

As Diana West writes in her remarkable book American Betrayal, we have “new totalitarians who look to Mecca instead of Moscow.”

Maybe we should be grateful that First Lady Michelle Obama declined to wear a headscarf during her visit there. It was a tiny demonstration of freedom in a country where rape victims have been sentenced to 200 lashes for being alone in a car with a man who was not a relative.

The First Lady’s fashion choices aside, the modern left has strayed so far from the classical liberal commitment to a free society that they condemn irreverent cartoonists (victims of a terrorist massacre, no less) even while they praise a totalitarian regime as a powerful voice for tolerance, moderation and peace.

It’s simply extraordinary to have an administration that “questions the judgment” of Charlie Hebdo but calls Saudi tyrants “important partners in the fight against terrorism.” And to have a president who personally attends the funeral of an Islamist monarch but sends no senior officials to the Unity March in Paris or to the funeral of Margaret Thatcher (an authentic hero in the fight against totalitarianism).

We have an administration that offers too many apologies for Islamists and too weak a defense of freedom. 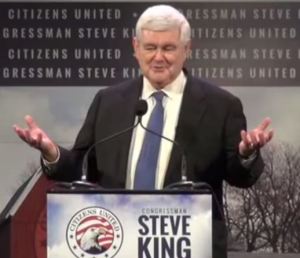 For at least thirteen years since 9/11, our elites in both parties have failed to take seriously the radical Islamist war against Western civilization. As I described in a speech in Iowa on Saturday, this is a danger we can no longer afford to ignore.

Clearly the current occupants of the White House have no intention of being honest about the threats we face. Congress can and should lead with hearings to present the facts, despite the administration’s apologies of and appeasement for those who would impose tyranny.

It is important to make clear that I differ with the Speaker’s concluding sentence. Far from only apologizing for and appeasing “those who would impose tyranny,” President Obama’s commitment to “fundamentally transform” America makes him a visionary and organizer towards tyranny here and around the world.

Richard Johnson: a mature Christian who understands the sweep of history, the unique role of America and these times clearly and precisely.
View all posts by Richard Johnson →
This entry was posted in America at war, Foreign Policy Disaster, Islamic war against America, Jinad/Shariah, Liberty, Obama, Tyranny. Bookmark the permalink.