JIHADIST TERROR COMING TO THE MALL OF AMERICA

The Department of Homeland Security Secretary, Jeh Johnson, in line with President Obama, is redefining the job of Homeland Security from protecting Americans to warning us. He announced Sunday on CNN that the Somali ISIS-affiliated Jihadist organization, Al-Shabaab, has threatened to terrorize (in the name of Allah) American shopping Malls—particularly the Mall of America in Minnesota. (I live within a 20 mile radius of the MOA.)

Besides making millions of little girls and grandmothers take their shoes off, Secretary Johnson’s DHS should insure that people of certain profiles do not travel freely into and out of America. But this Administration is the opposite. More than simply looking the other way as Somali Islamic radicals come and go to Minnesota, they actually facilitate the movement. As policy, this Administration specifically aids the immigration of Somalis to Minnesota—including the Minneapolis area, St Cloud, a Minnesota regional center, and Willmar, a rural county seat. You must see it as a Mogadishu to Minnesota Pipeline.

The Mall of America consistently attracts over 40 million visitors a year from around the world. For starters, it has among the largest selection of stores and shops in the world. But the mall includes a large selection of restaurants—some of them destinations such as Tucci Benucc, Theater and Movies and several unique attractions including the Nickelodeon Universal all indoor theme park, the Sea Life Minnesota Aquarium and CSI – the experience. If you haven’t been to the MOA, here’s an internet tour:

The Mall of America from the air.

The mall from the street:

A typical view of shops: 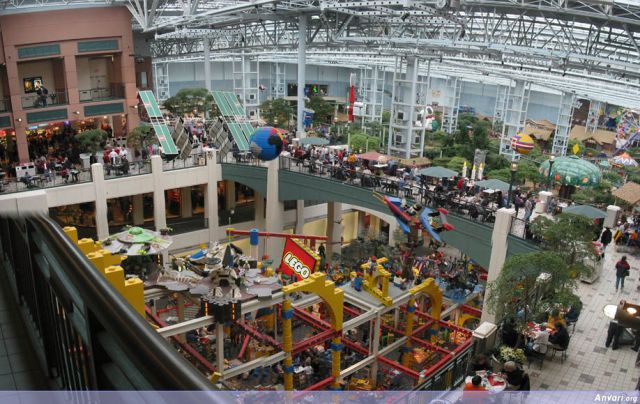 Tens of thousands of Somalis live within 5 or 6 miles of the Mall of America. Dozens—hundreds—of Somali fighters have left Minnesota to go fight for both Al-Shabaab and ISIS itself. It has been widely reported that many are back. Why? To get jobs here because Marie Harf and Secretary Kerry didn’t give them a job, at your expense, in Somalia or some other Shariah law hell hole of a country? No. Because the jihad in Syria or some other hell hole is finished? Not yet at least. They are almost certainly back in Minnesota to train and lead local jihadists to terrorize right here at home.

Can they get away with it when so many Americans have conceal and carry permits and must be packing? The Mall of America years ago declared itself a “gun free zone.” No regular customer will be armed. The Somali terrorists? Take a guess.

President Obama and his cronies have reduced their capacity to defend America to telling us which parts of America we must avoid because President Obama’s “smart policy” is working about the same way here at home as it is in Yemen, Somalia, Syria, Iraq, Libya, Israel or Russia. We are not even going to mention Ch___ here.

Perhaps Mayor Giuliani put his finger on something when he set off a firestorm saying, “I don’t think President Obama really loves America.”

Instead of closing with my own thoughts on that, let me turn it over to Mr. CJ Pearson:

Richard Johnson: a mature Christian who understands the sweep of history, the unique role of America and these times clearly and precisely.
View all posts by Richard Johnson →
This entry was posted in Anti-Semitism, Islam the New Normal, Islamic Persecution of Christians, Islamic war against America, Jinad/Shariah, Obama, State of Obama's America. Bookmark the permalink.

1 Response to JIHADIST TERROR COMING TO THE MALL OF AMERICA