ALGORE IS STILL AT LARGE: GOD REMAINS IN CONTROL OF THE CLIMATE

According to numerous writers, including Steven Hayward, Algore jumped the shark last week at Aspen. 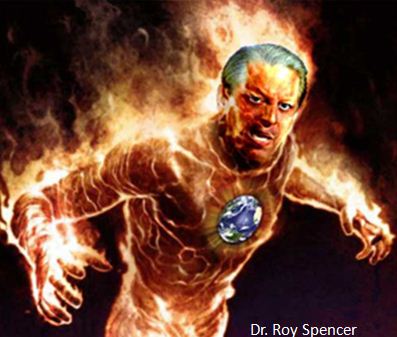 Here, in part, is Algore’s rant, “Some of the exact same people — by name I can go down a list of their names — are involved in this, and so what do they do? They pay pseudo-scientists to pretend to be scientists to put out the message: ‘This climate thing, it’s nonsense. Man-made CO2 doesn’t trap heat. It may be volcanoes.’ Bullsh**t! ‘It may be sun spots.’ Bullsh**t! ‘It’s not getting warmer.’ Bullsh**t!”

These skeptics have been so successful, said Algore, that public and political discussions about climate change have devolved into a cycle of partisan bickering. “It’s no longer acceptable in mixed company, meaning bipartisan company, to use the godd**n word climate,” he said. “It is not acceptable. They have polluted it to the point where we cannot possibly come to an agreement on it.”

What set him off? James M. Taylor, a senior fellow for environmental policy at The Trumpet’s favorite climate truth-teller, The Heartland Institute, and Dr. Roy Spencer, a principal research scientist at the University of Alabama in Huntsville and The Trumpet’s favorite climate scientist, released a major analysis of  NASA satellite data from 2000 to 2011 that, according to Taylor, deals a critical blow to some of the statements and predictions that have been made by global warming adherents.

Fortunately we also have science and scientists with character like Dr. Spencer. And fortunately we have The Heartland Institute and their six international conferences on climate change.

Get the full proceedings of the 6 International Conferences on Climate Change, including links to videos and PowerPoint presentations, at the links below.

Richard Johnson: a mature Christian who understands the sweep of history, the unique role of America and these times clearly and precisely.
View all posts by Richard Johnson →
This entry was posted in Irony Is Funny, The Cost of Democrats. Bookmark the permalink.